When faced with the situation below, in the next completed page of Daredevil:- 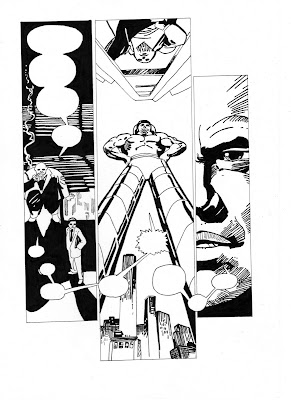 To start the ball rolling on Turks Icarus like story, he decided the first thing to do on stealing stilt man’s armour is offer his services (as an assassin) to the Kingpin

But even from the position of having no assassin and needing one, Kingpin still instantly dismisses Turk – which tells you all you need to know about what would follow for Turk himself

And also tells you a lot about the Kingpin, a man obviously far away from the pantomime excesses of the “The Apprentice” TV Show

The question to focus on this time is has society moved on from the 70’s / 80’s of being shocked that a Boss could be corrupt and that was wrong – to a point where overexposure or familiarity with any number of people in any kind of power being equally corrupt that not only has it become more acceptable, but has gone all the way to being a (almost pantomime) cliché of Donald Trump or almost Dr Evil proportions?

I will pick up on this some more next week where I deliberate on The Kingpin having a heart...


http://drawingb0ard.blogspot.com/
I really like the combination of thick lavish brush work, heavy black in combined with some great fine line work, there is a real sense of character, personality and life in the richness of Thorsten's work and the facial expressions he does are just spot on perfect
Check out this cool drawing - look at the halo he has put around the central character here contrasted with the fine line of shadow of the building which is completely real and totally architecturally correct (which you almost never see in comics):-
(Parental Advisory) 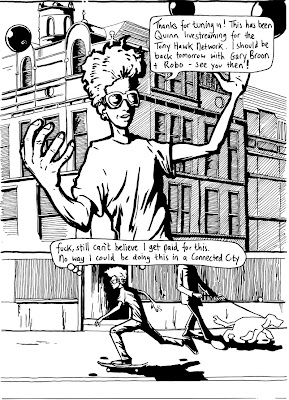 But don't just take my word for it , go check it out for yourself and say "Hi" when your over there, Thorsten will be glad to see you!
Posted by Robin at 14:05