Play, the pipes of peace

But in this next completed page of Daredevil:- 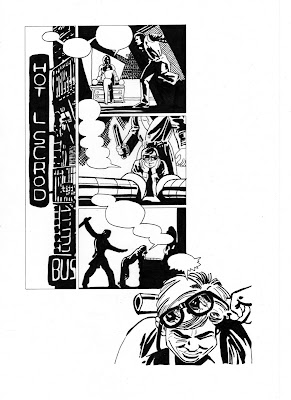 Turk would most definitely beg to differ, oh he uses a pipe all right, but in a very different context than Paul McCartney every intended, in fact it’s safe to say this is the complete opposite of peace!

As the degradation of Wilbur Day (the real name of Stilt-man) continues- it started with losing a glove while being too focused on counting his cash while at skyscraper height, then having being spied and declared as “leapfrog” by Turk while looking for a replacement glove

To Turk following him right to his home (or secret lair, it’s never said which) creeping up on Wilbur who is blissfully unaware and seemingly totally obsessed about being taller – literally standing on the shoulder of giants, with Turk then coshing him on the back of the head

Hopefully you will noticed I haven’t said that Stilt man’s degradation has not yet ended, but what can that mean?

Well obviously someone else will be wearing the suit the rest of this issue, rather obviously the same guy coshing poor Wilbur

But does this mean then that Turk is going to be much better Stilt man or is it much much more likely that having had far more sense (and luck) than he ever has had to date in any issue of Daredevil to date, everything goes completely pear shaped from here on in?

Remember what they say about the “the higher they climb”

And join me next week as the fun kicks up a notch with Turk in command
Posted by Robin at 13:48