According to Frank Miller, That is what She-Hulk is in this next recreated page, which continues with the parody of Franks own “Sin City”:- 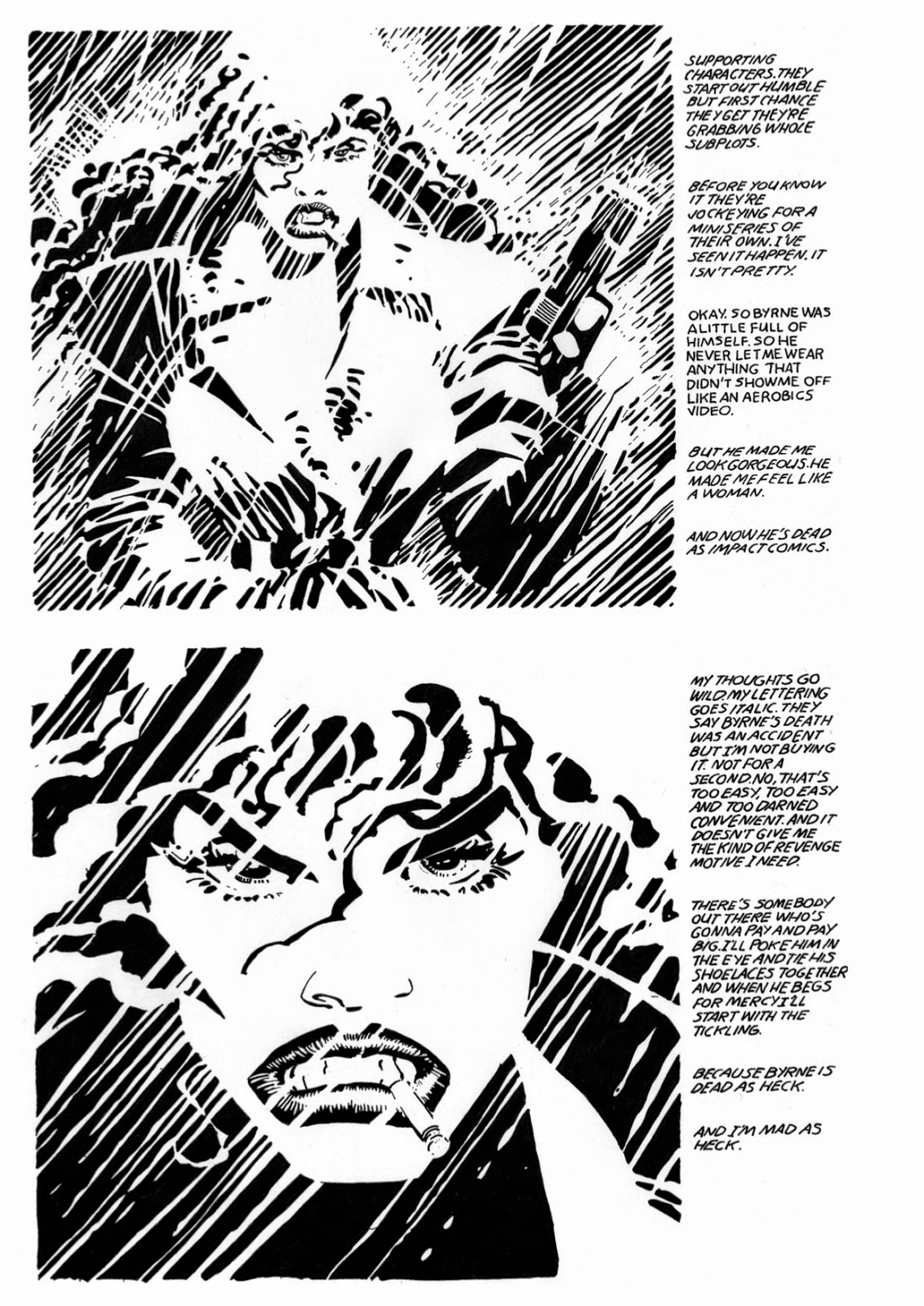 Which makes pointed references to Aerobic videos (of the 1980's one presumes...) … and Impact Comics

According to “wakipedia”:- “Impact Comics was an imprint of DC Comics that was aimed at younger audiences. It was begun in 1991 and ended by 1993. It’s titles featured the adventures of altered versions of superheroes licensed from Archie Comics including the Fly, the Comet, the Shield, the Jaguar, the Web, and the Black Hood. Changes included making the new Jaguar a woman and making the Web an organization instead of a solo hero. This was a second attempt to revive the old Archie heroes...”

So if nothing else, we can safely say Frank was aiming his shotgun at DC with the line “dead as impact comics”…

And then moves back into hard bitten revenge motives…. with She-hulk tickling whoever crosses her path because she is mad as heck…

No, not Don Heck… but the all-ages acceptable for use variation of another name for Hades… aka the place the Devil likes to live…!

IN TWO WEEKS:- She-Hulk reacts to the Frank Miller pages and another guest artist steps forward…

Built for love, but ready for war

This is the description given to She-Hulk in this next page, this time quite clearly written and drawn by Frank Miller.

And what we have here looks as if it could just be a page straight from Sin City that is with the obvious exception of the hand lettered dialogue that accompanies it:- 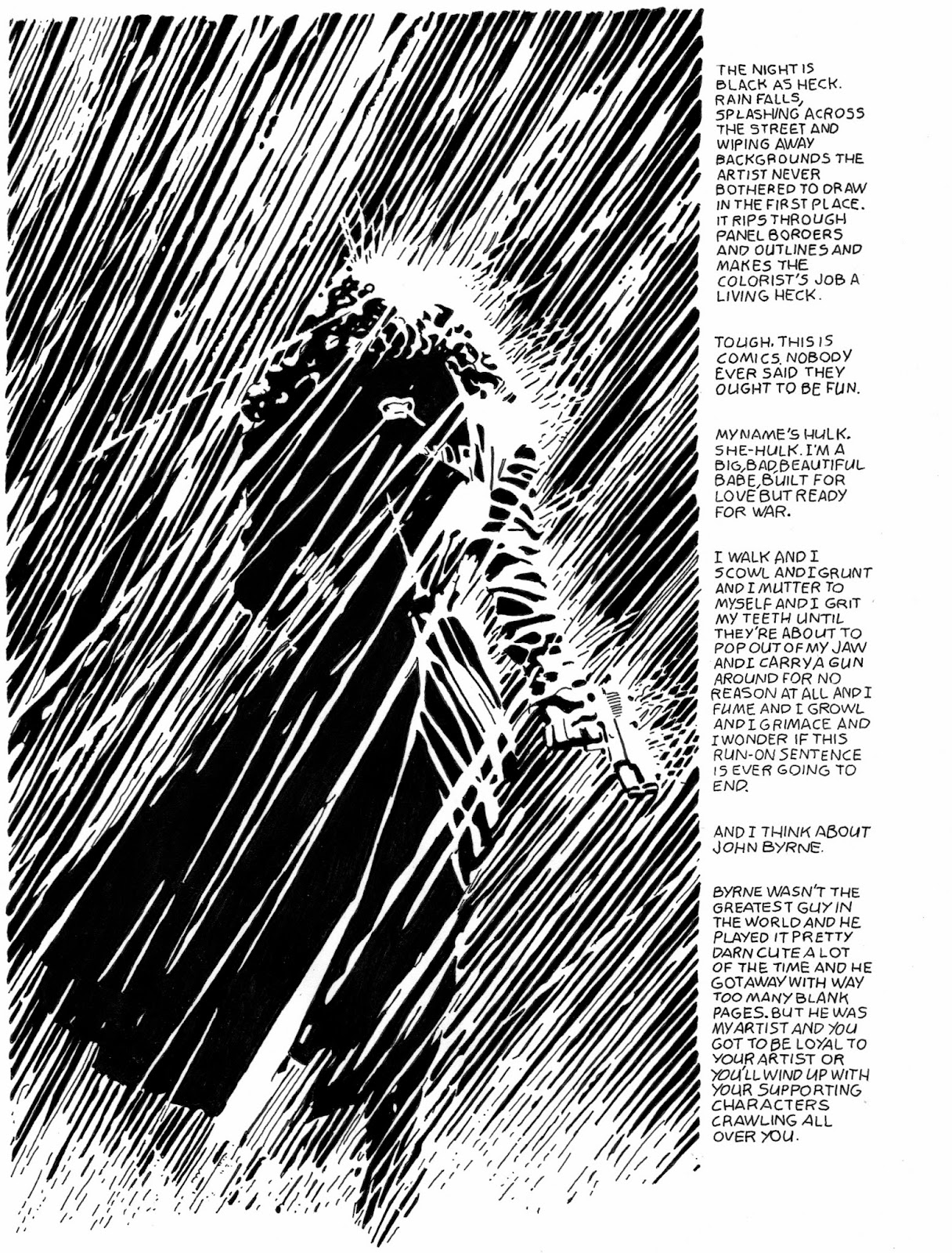 Where Frank is clearly having fun at his own expense with parody laden noir movie dialog, firstly attacking his own laziness at drawing backgrounds, then saying comics are not fun

She-Hulk scowls, fronts, mutters and grimaces - none of which she has ever been known to do at all.

It shows that Frank Miller does actually have a sense of humour, and is willing to pick himself to peices… If only we had seen a lot more like this and a lot less… Well - I think you know what I mean…

This particular page has to be one of the hardest I have ever had to recreate, I have no idea how big the original art is, but my recreation is on a A4 size piece of paper and it took ages to do! So I don’t think Frank Miller was really being that lazy, do you?

Having established last week that the first would be replacement artist for She-hulk would be British is a start... 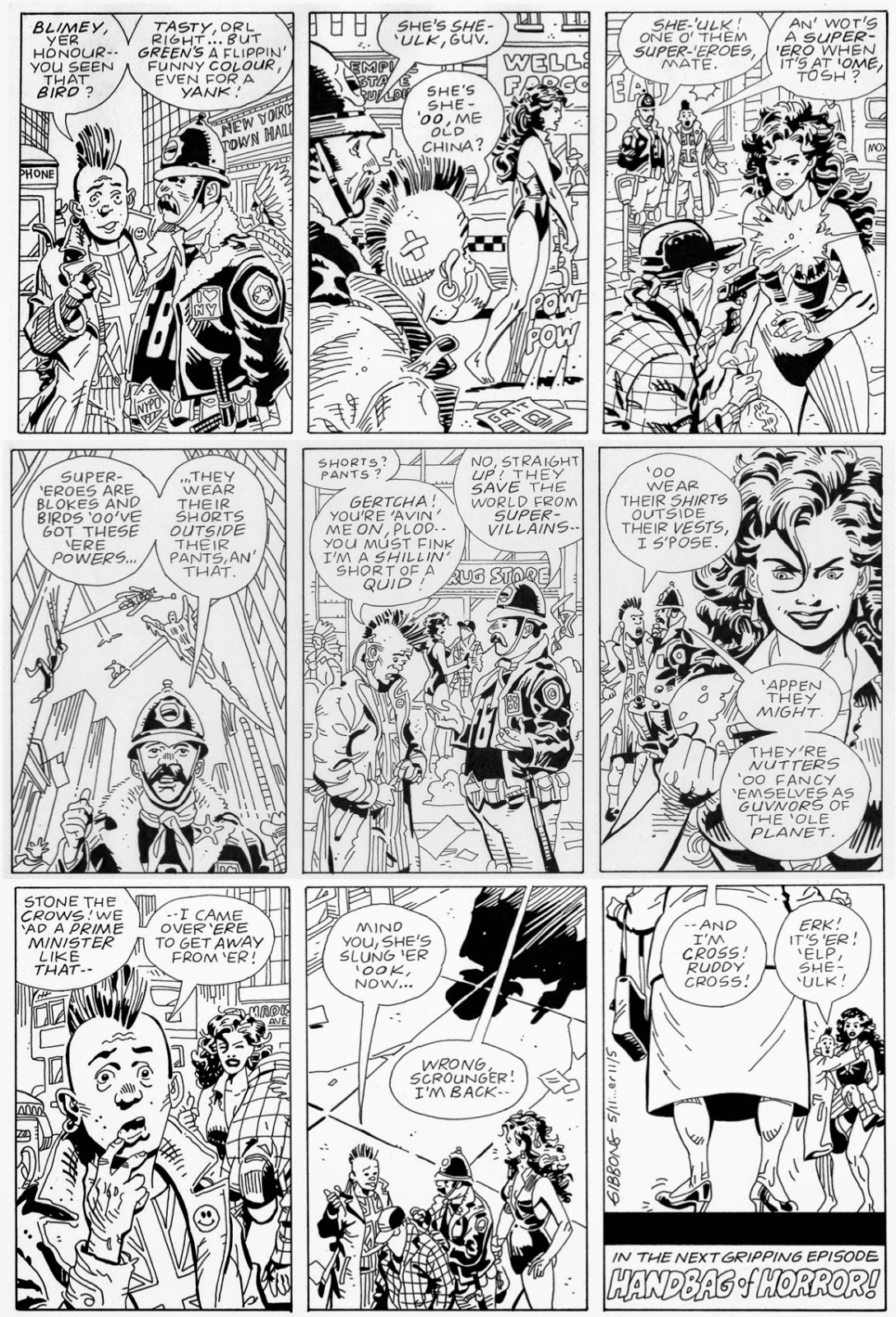 There are multitude of references in the art, this is just a few :-

The coat the punk rocker is wearing is the same as Rorschach’s there is the obvious inclusion of a Smiley badge, the shorts also appear to be pin striped just like Rorschach’s trousers. But we have the much more traditional union jack T-shirt and mohawk haircut to offset this

The police-man is a complete miss mash of apparel - wearing a english police helmet, a sheep-skin jacket (as if he is from ‘up north’), a black shirt with FBI written on it, a standard english police truncheon and a badge on his belt very reminiscent of Judge Dredd from 2000AD (a comic that Gibbons worked on extensively), he is also referred to as "Yer Honour" suggesting he could be in fact a Judge...

There are also a number of british items in the street, such as an old red telephone box, a London double decker bus together with the marvel cliche generic buildings with american names just put on them such as new york town hall etc

And this page is a summary of all those negative responses all combined together in one single page? 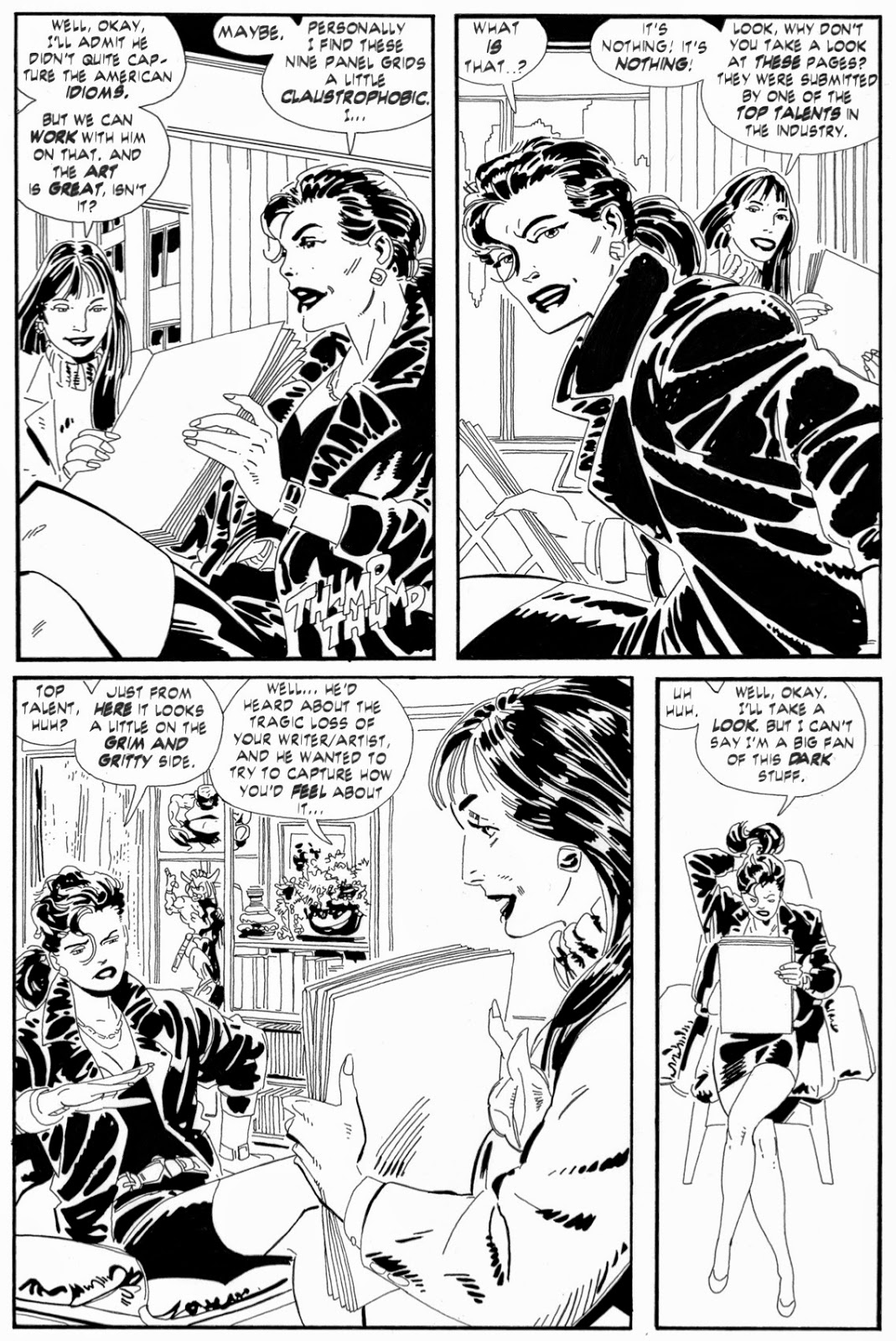 Who could it be?

NEXT WEEK:- She-hulk wonders if her run-on sentence is ever going to end!

This month we feature the ludicrous misadventures of the Jester... who unfortunately does not have a thing for citrus fruits.... 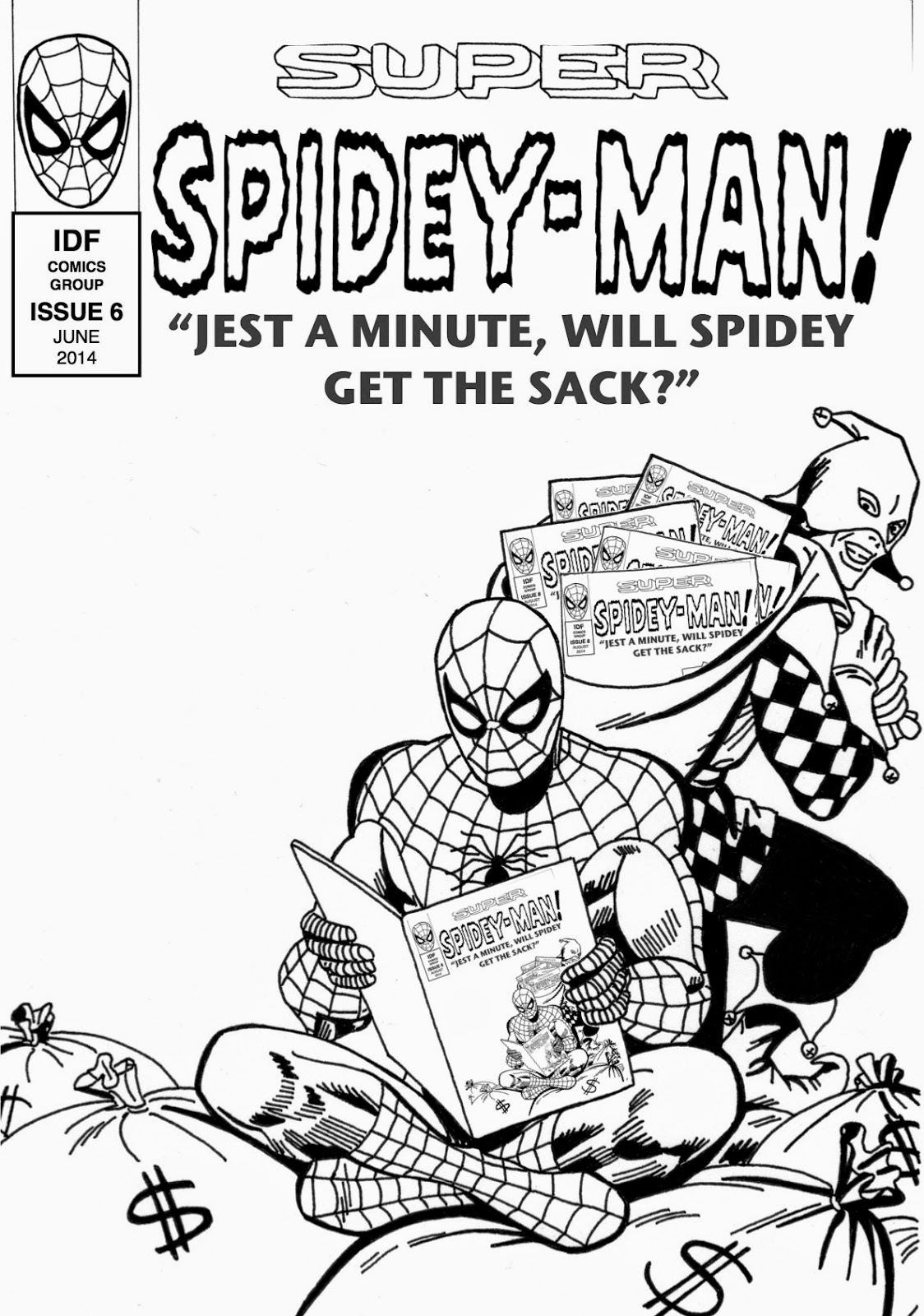 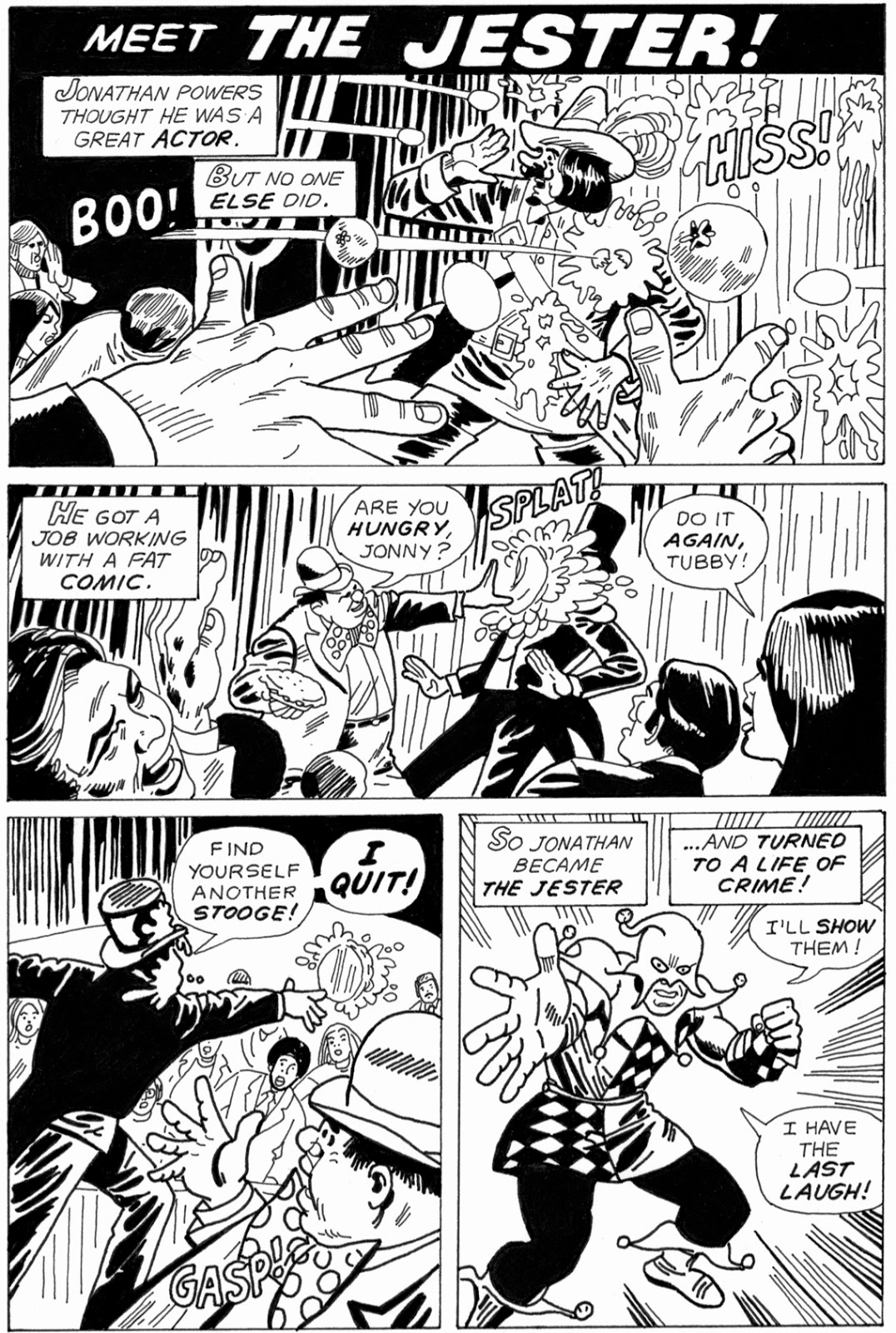 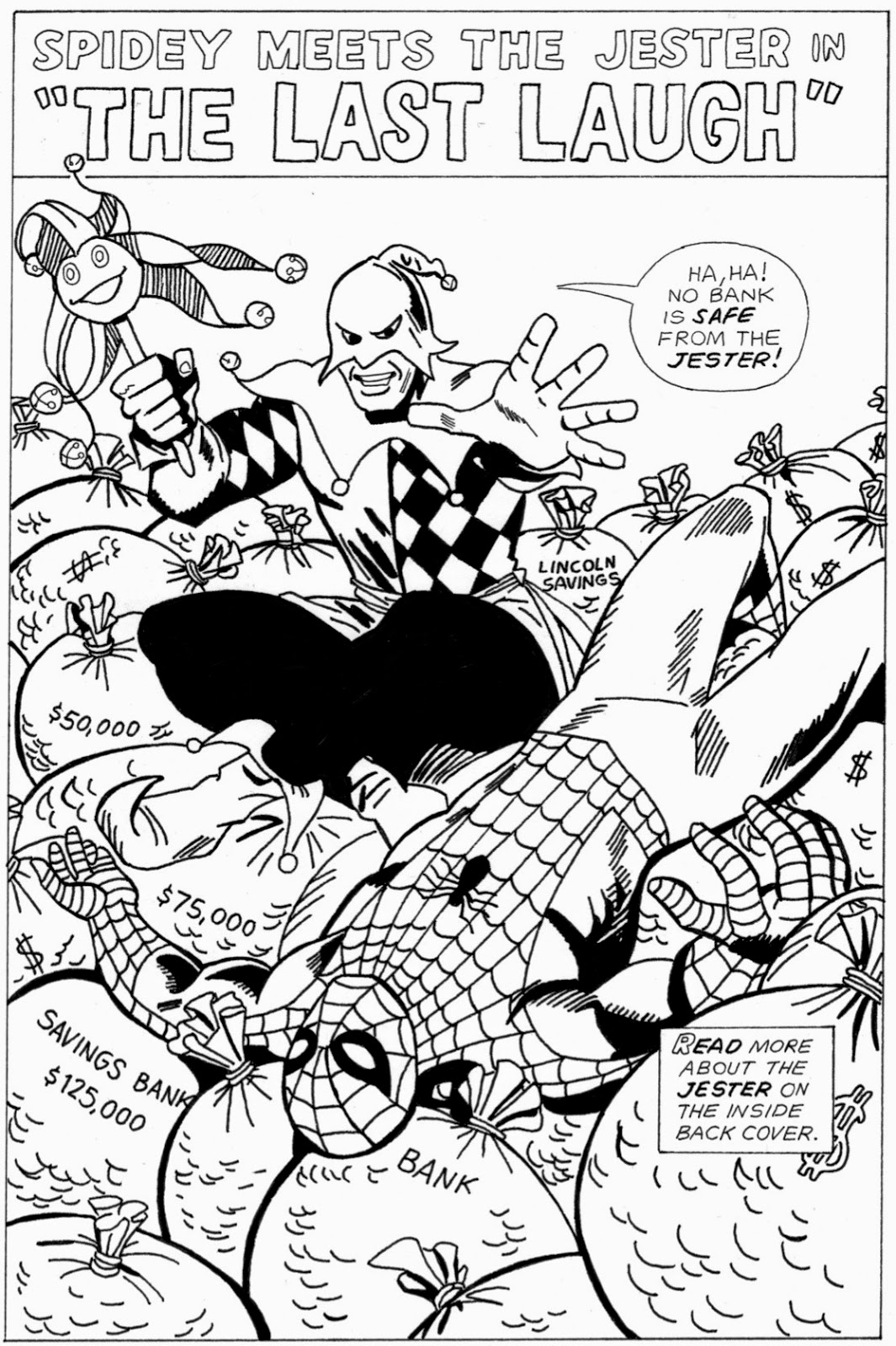 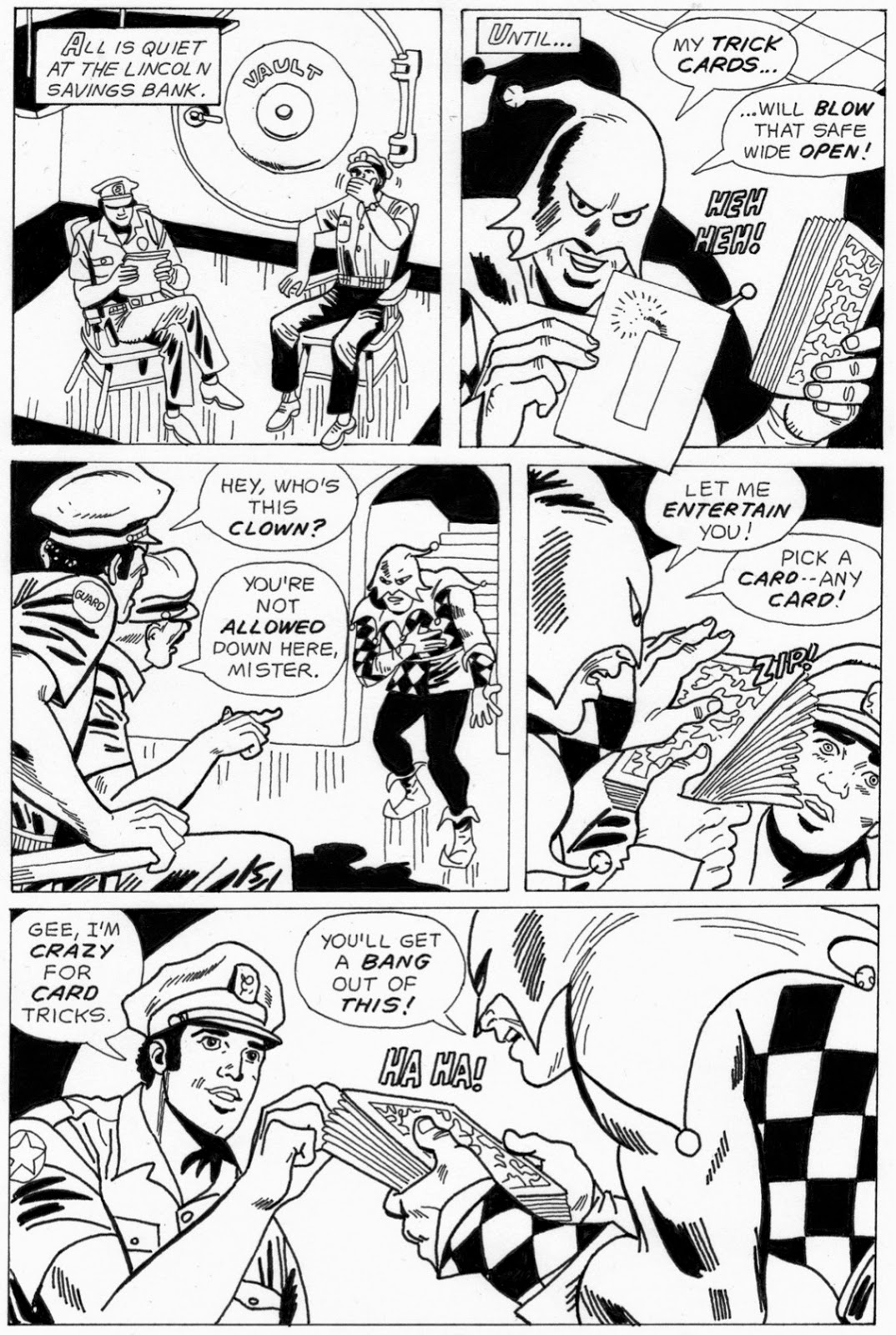 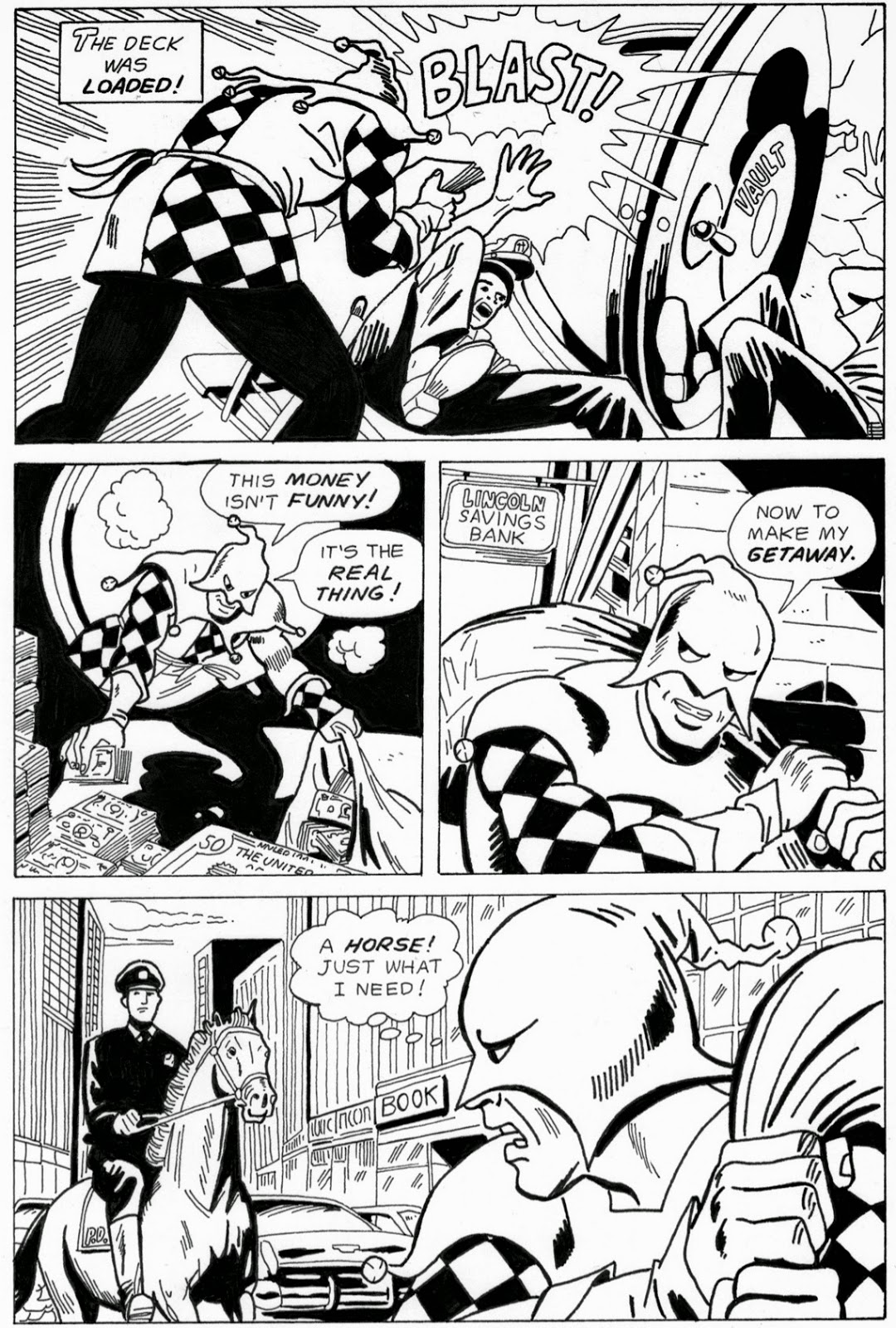 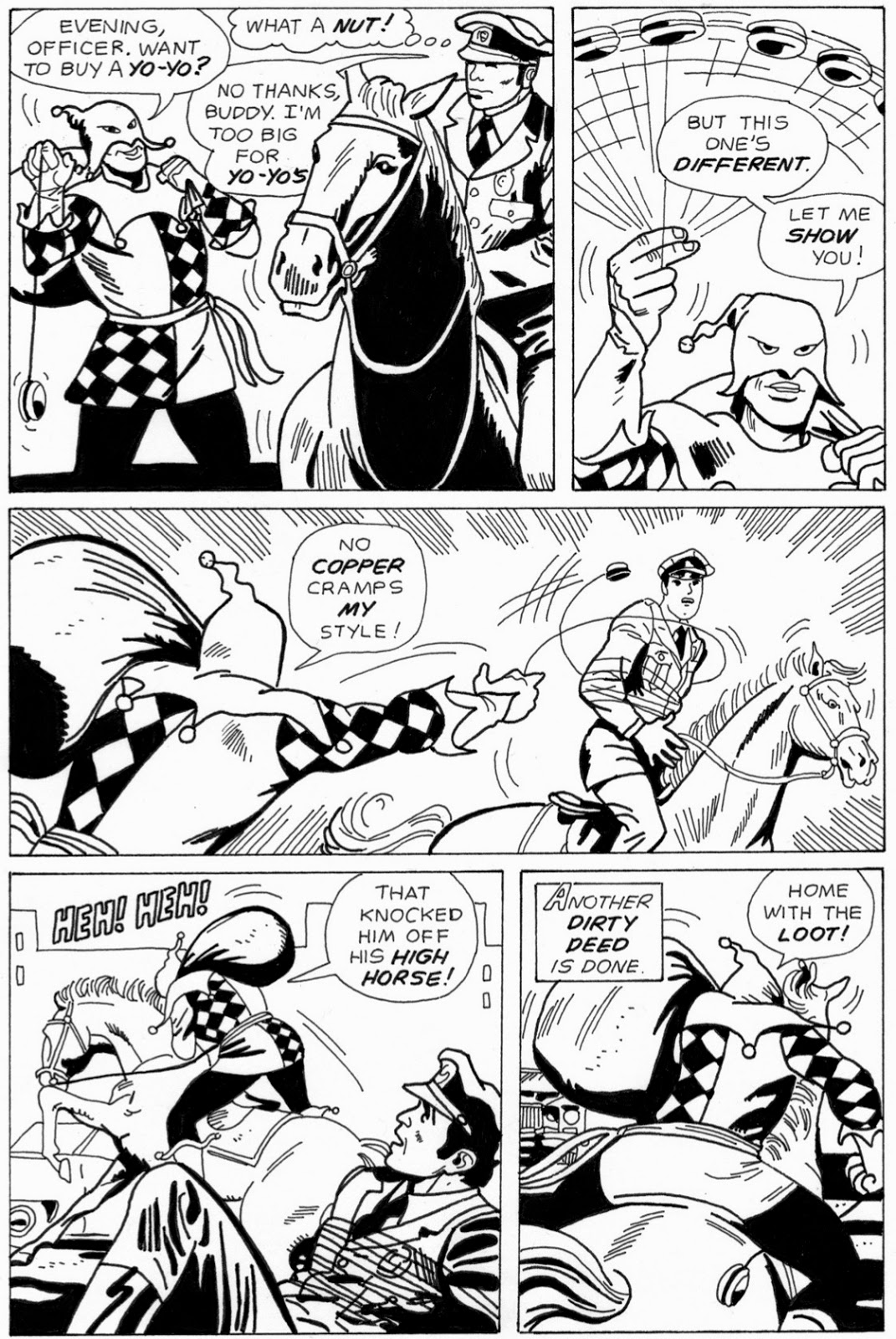 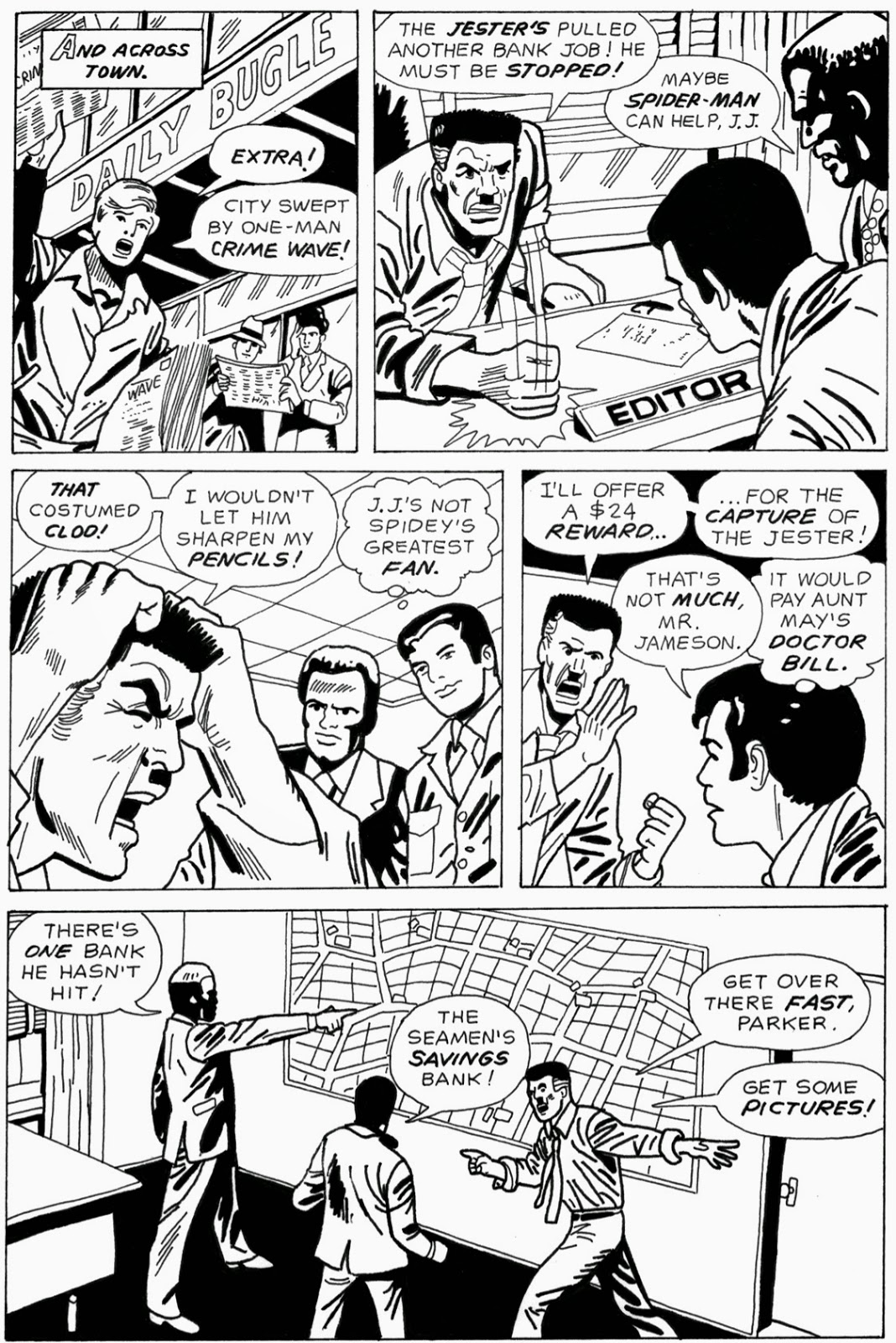 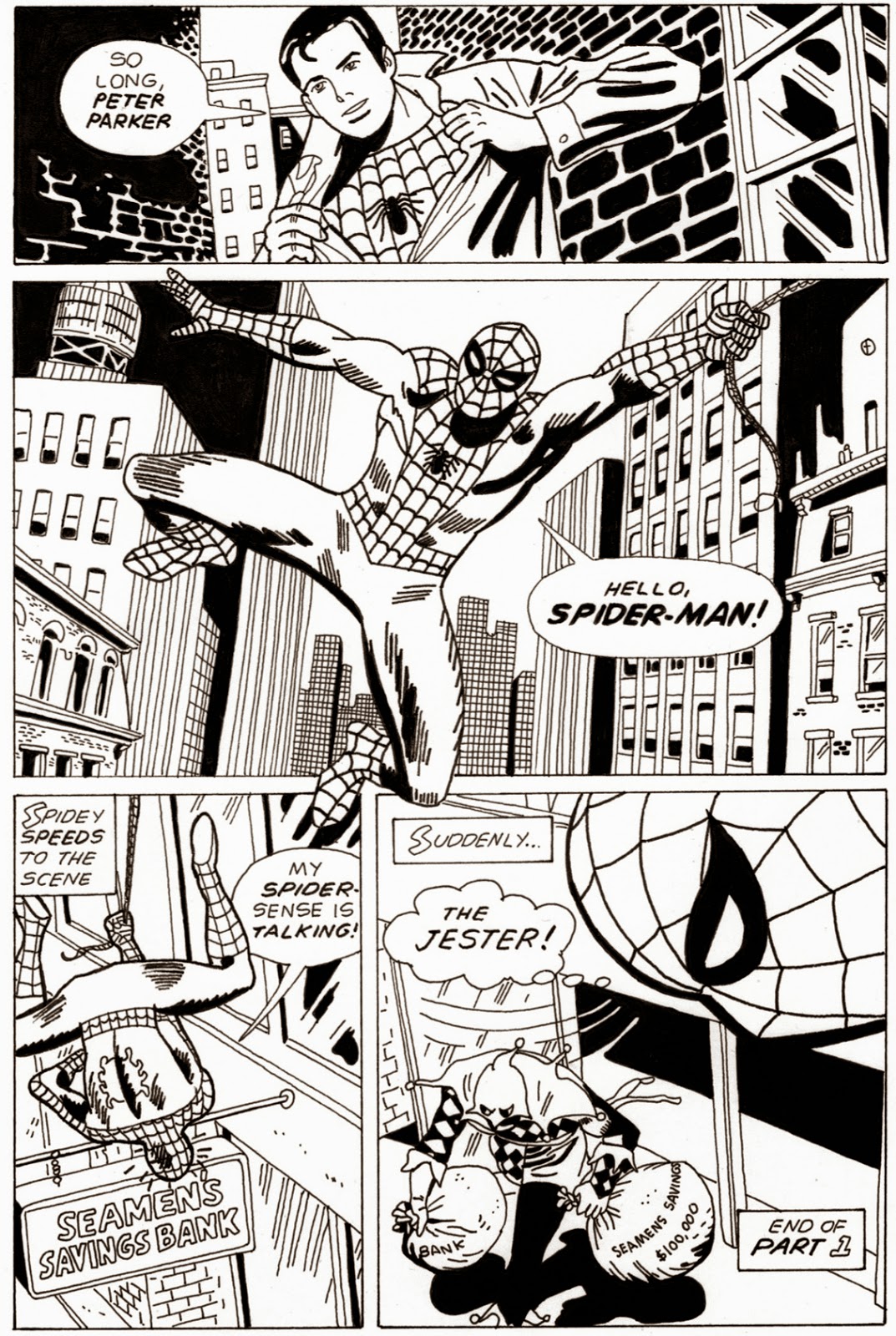 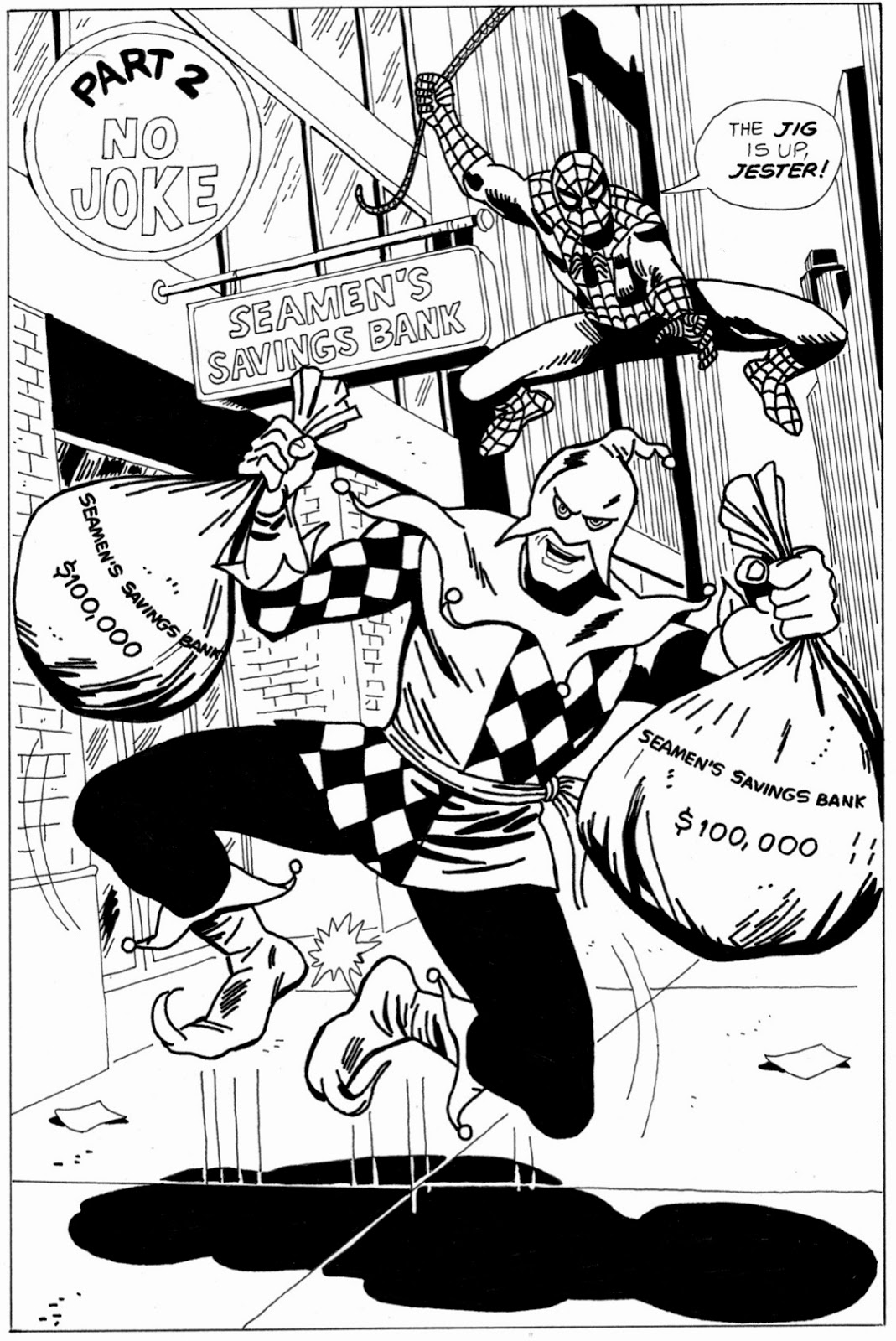 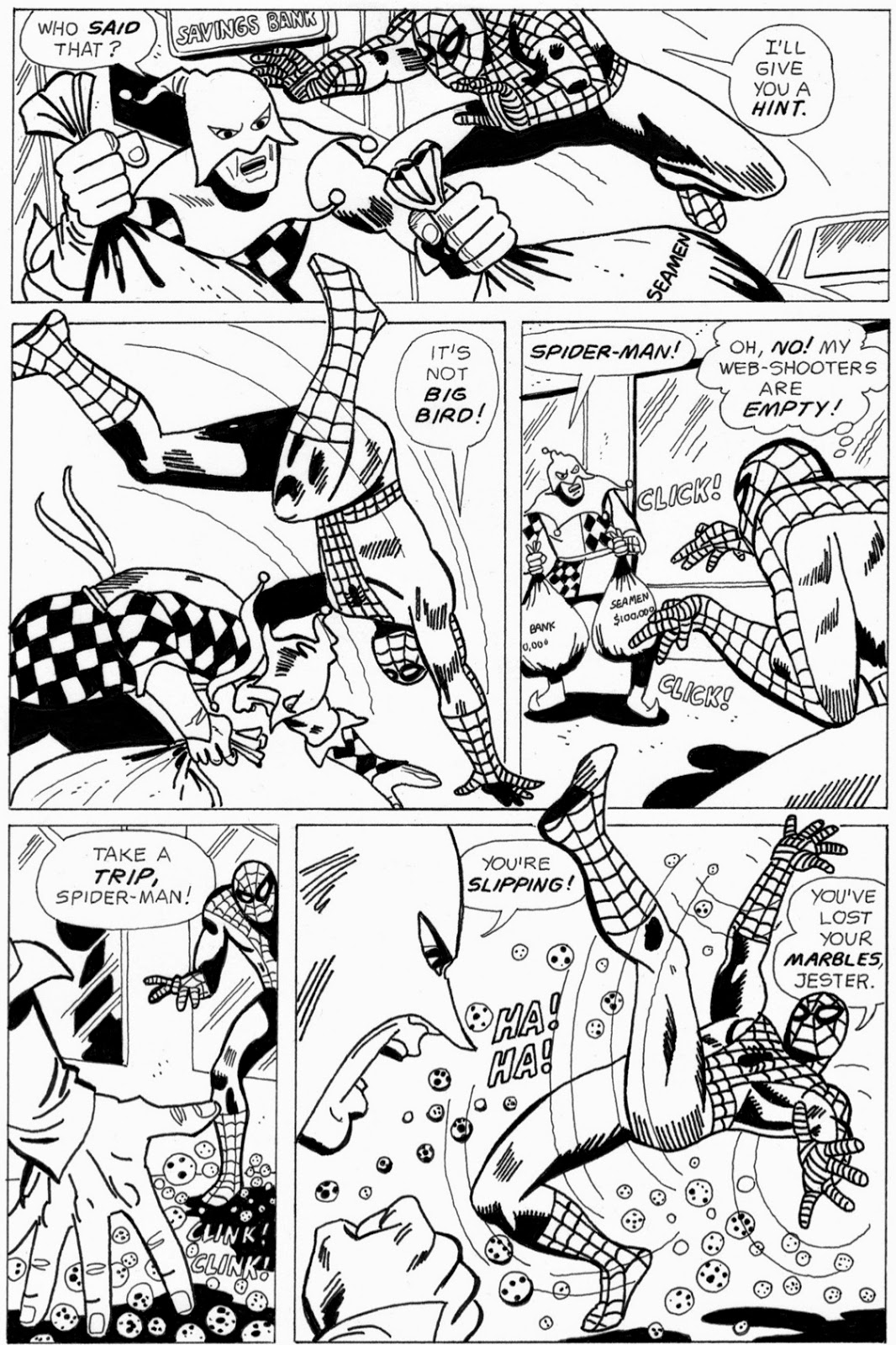 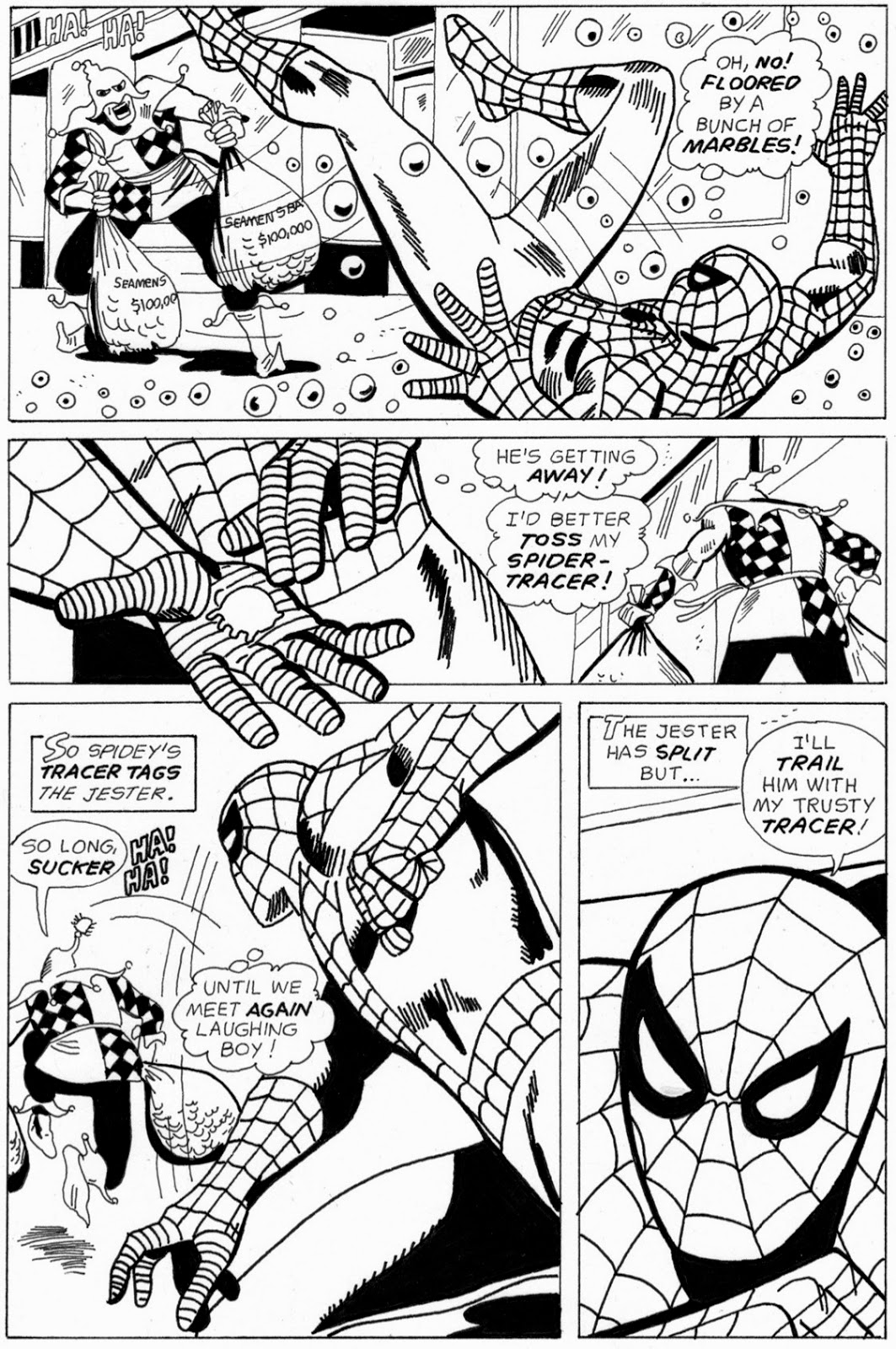 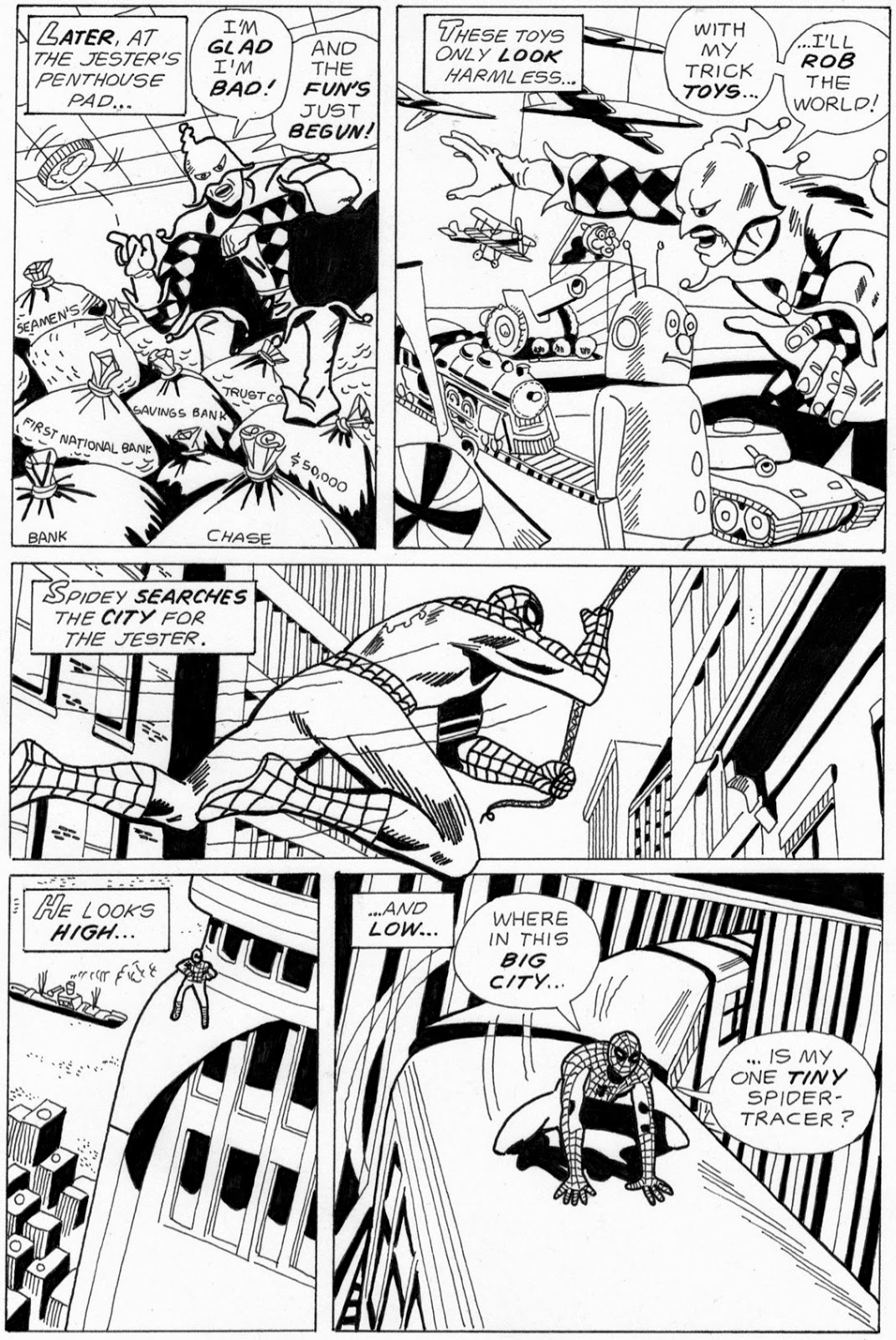 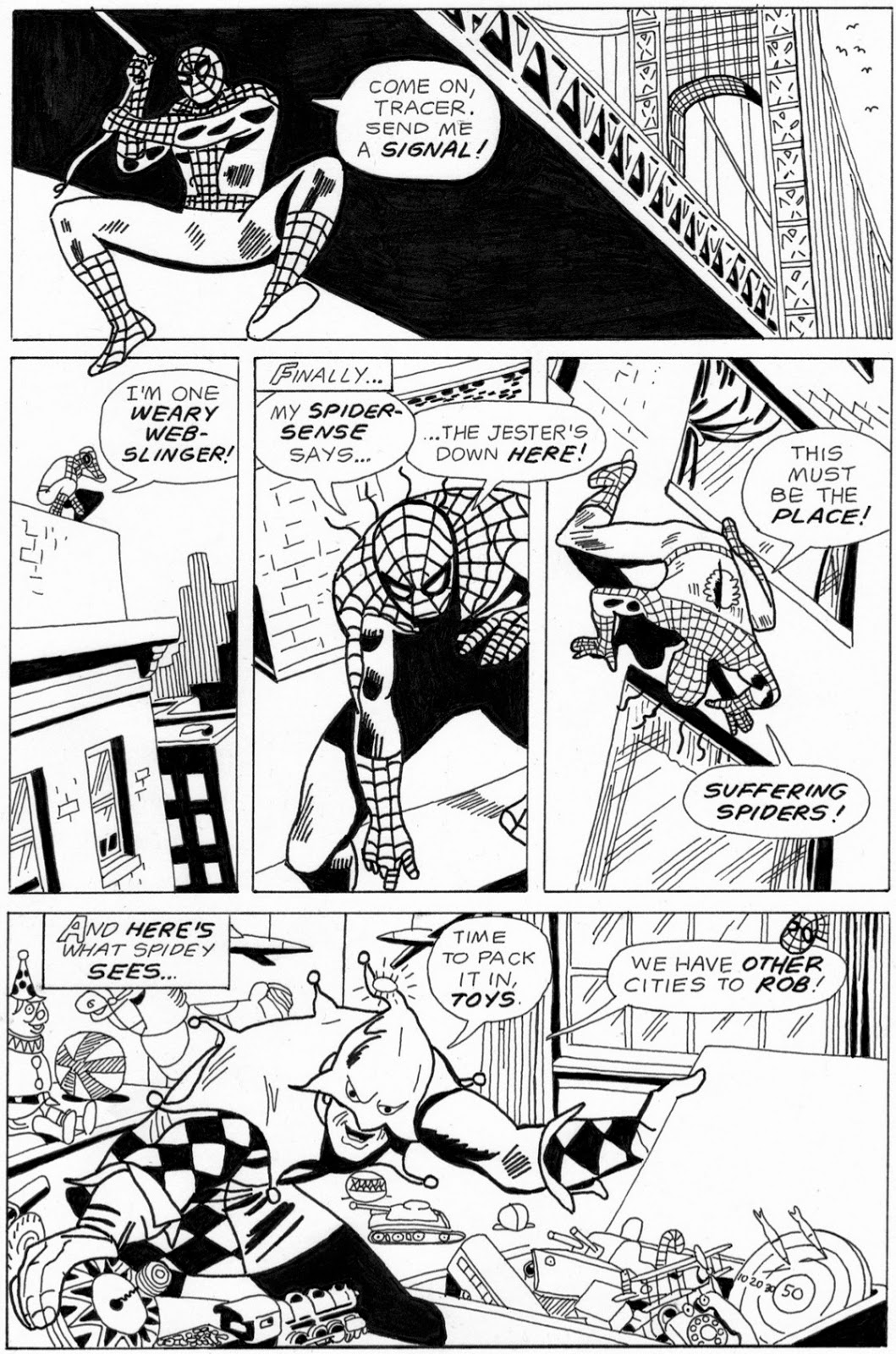 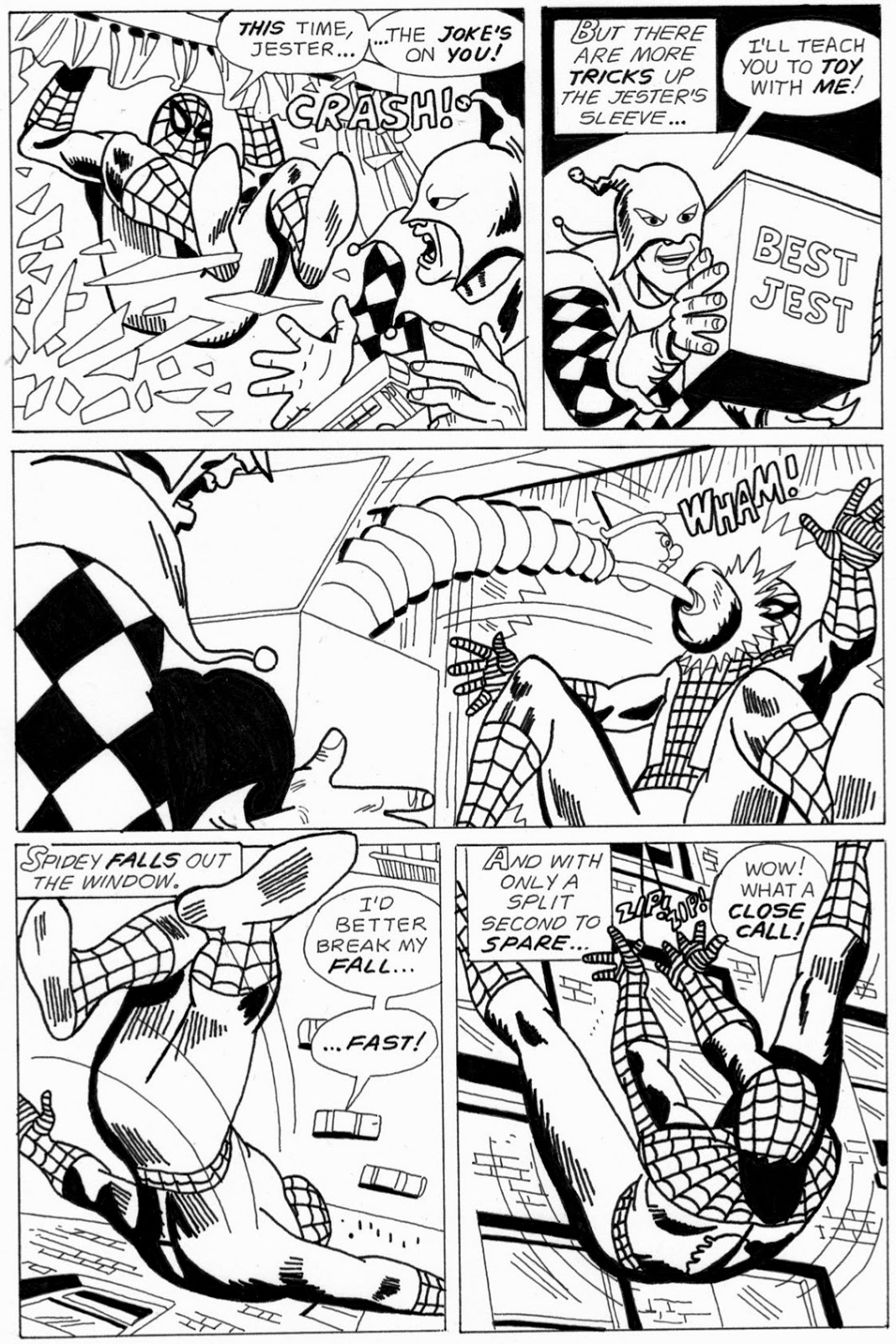 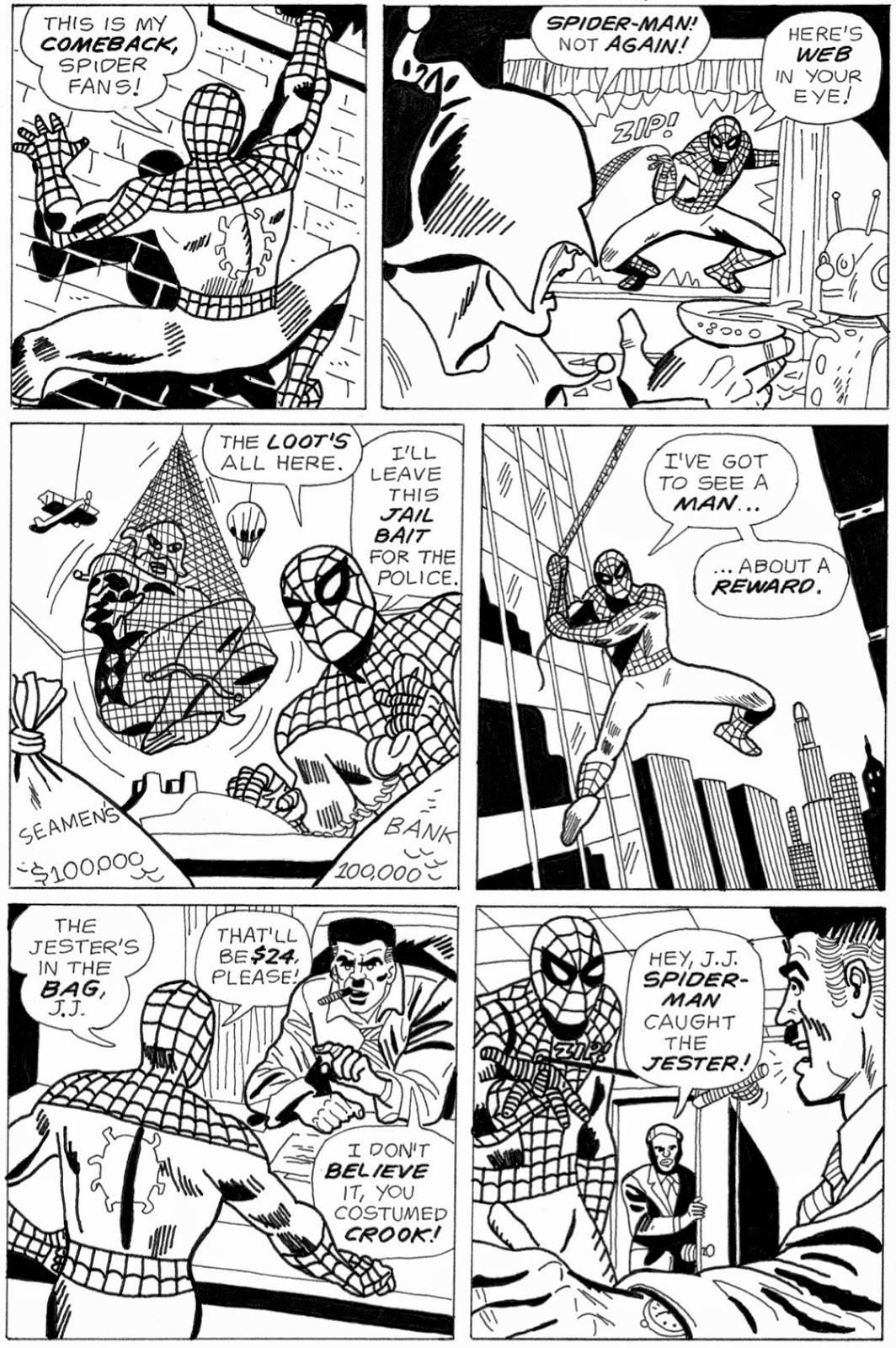 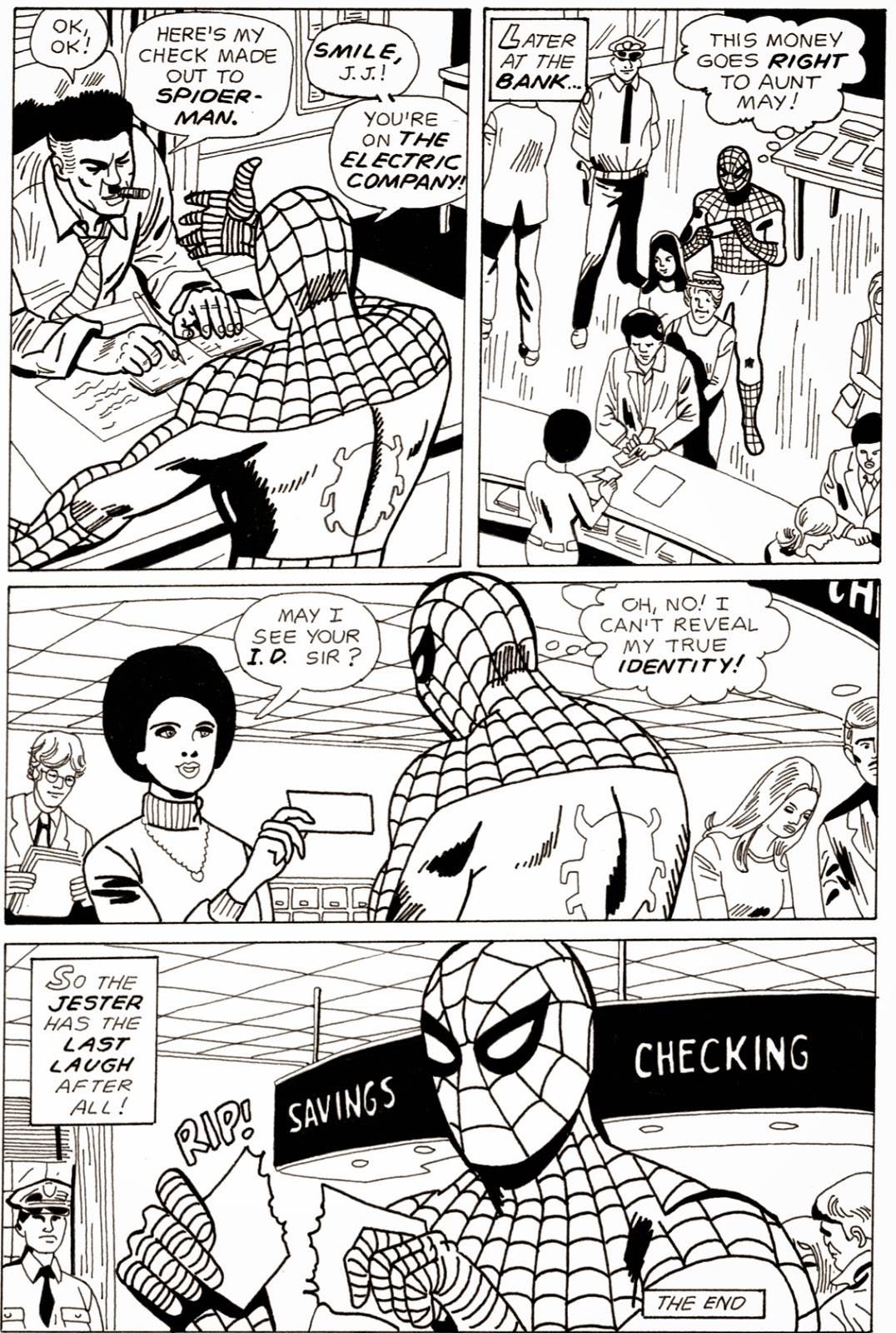 Super-Spidey Man! Will return the 1st week of July!