This is not honourable 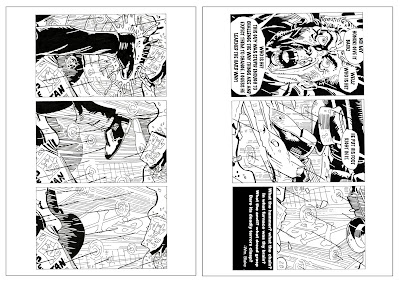 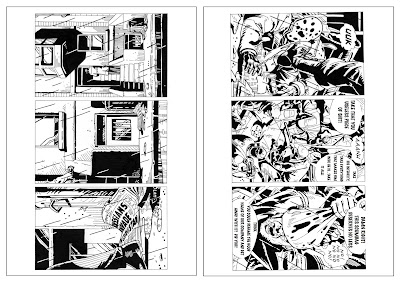 Continued next week
Posted by Robin at 10:32 No comments:

Who cares about the What Men?

Welcome to the World of Images Degrading Forever

The first thing to quite clearly establish is this is not reality.  There may well be a whole load of drawings here which look rather similar to something else and a lot of names which may sound familiar- but I can assure you this is just pure happenstance any resemblance to anything living or dead is unintentional or done as parody

If you have happened to have not read whatever it is that may look similar to this, I am not going to recommend that as a publication you can buy so you can understand what follows as what follows is not for you

None of the finished drawings that appear here will be original - they will be redrawn by hand by myself, degraded if you will

We start with the cover... 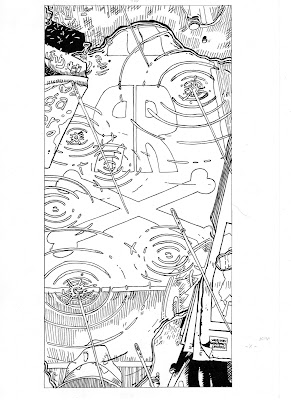 Join me next week as we enter inside and the story proper begins...
Posted by Robin at 12:08 No comments: 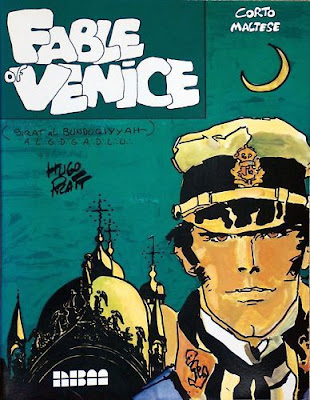 The drawing I have chosen is from "Fable of Venice" 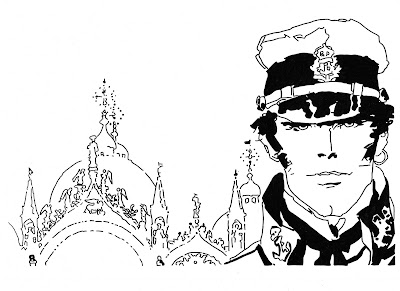 The line all suggest life emotion, passion, wear tear and a palatial background all with the minimum amount of drawing

By looming much larger than life in the foreground is Corto Malteste himself looking assured. He has seen some fights and action but still he stands tall untouched

In attempting to recreate this I tried to go as true to the original as I could, so i went straight to ink using a berol handwriting pen.  This pen had almost exactly the same width as the lines on the original and the finished product you see above took just under an hour roughly

Of course I couldn't pretend to be Hugo Pratt, but this was a joy to draw

Doug Noble , this is on its way to you - thanks for the great suggestion

Voting has closed
And we have a tally of one vote each for each suggestion.

This means I have to make a casting vote as to what will be next.  As ever I try to be practical and not embark on a project that is too massive, given my rate of one page a week.  As regular readers have seen some pages from Watchmen have already been completed. So it makes sense to continue with those

Find out - Next Week

The Play of Lights

According to "Wakipedia", Muñoz is "an Argentine artist"… "most notable for his influential black-and-white artwork. His hardboiled graphic novels series Alack Sinner (with writer Carlos Sampayo) is a noted source for Frank Miller's Sin City."

"His style is characterised by a sharp line, heavy chiaroscuro, and exaggerated, sometimes grotesque, faces and figures. His work has had a strong influence on Argentine Alberto Breccia, his teacher. Also British artists Dave McKean and Warren Pleece" 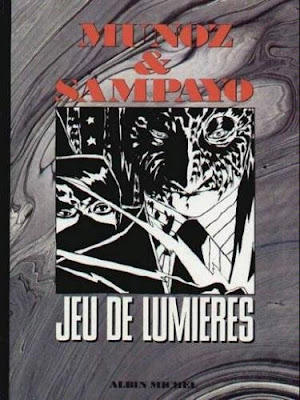 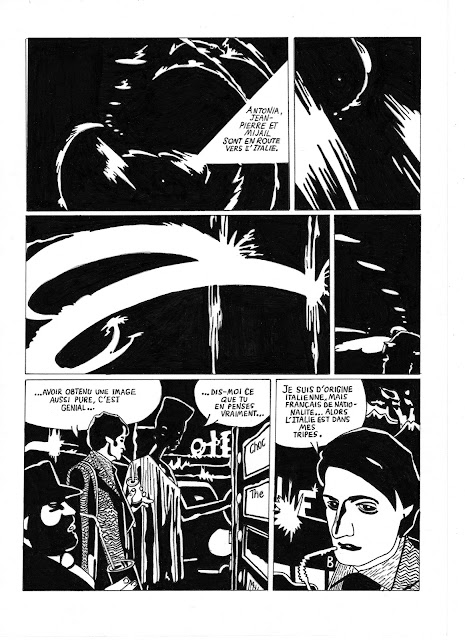 "To get an image as pure as this is something else"

Thanks to Ed Hilyer for suggesting I attempt a Muñoz - Ed this drawing is yours! Just get in touch

Next week - Hugo Pratt and the announcement of what is next for Images Degrading forever - Please cast a vote you have 7 days left! - For more details see the last few blog posts - Thank you

History is written by winners

Just buy doubt land issue 4, already
Heck it's the last issue, so if you don't buy this maybe I will have to make another issue just to keep you entertained when reading this blog. I mean you all come here to read these crass attempts at profiteering adverts don't you? 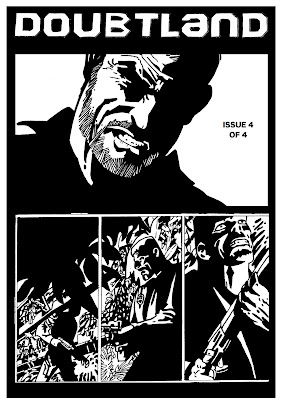 Look it's just one english pound, that's barely tuppence halfpenny in old money - that just about covers the cost of printing - there is no profit made here

And while we are in the land of make believe, there is even a feint possibility you might even enjoy the contents. Note I said Might

You can get a copy here

History is written by winners
I guess that would be me, I seem to be the only person around here, so I get to be the defacto winner!

I wonder if I could effectively argue that nothing is real as after all you are only relying on what you can see and how reliable is that?

Yes - I mean Phenomenology - How do you know you or anything else exists?

WHAT?! oh Milk and Cheese have just told me to shut up - and about time as well!

But I thought they was dead... 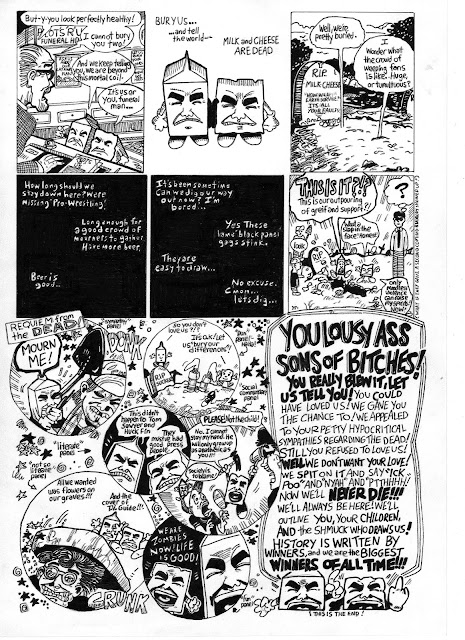 If that is them dead, I certainly would not want to meet them when they are alive!

The Next Project
Just a reminder that voting is open for what the next project will be on this blog.

At the moment we have one vote for Watchmen, one for José Antonio Muñoz and one for Hugo Pratt.

Voting will remain open until Thursday 17th May. You can vote by posting a comment or sending me a email

Anyone who votes I will give a free sketch to as well, some come on already!

Join me next week as I consider the work of José Antonio Muñoz!
Posted by Robin at 10:46 No comments:

Its the Merry May Marching Society


No It's anything but that - fortunately

But yes -its another month and you know what that means...

May is Doubt Land 4 Month
The final issue of Doubtland is unleashed at just £1 per copy. This title continues to do well, this issue sold out at the comika comiket! As well as concluding the story there are 4 pages of back matter, including a epilogue by Alan Dean Foster and a rarely seen essay by Jim Steranko on the making of the comic book adaptation of outland

Just click the link below to get your copy

Doubt land collected?
Already a few people have asked will Doubt land be collected - Well certainly not at the moment, but if enough of you email and ask then sure, why not?

This month we continue in print and in digital format with some great new content! 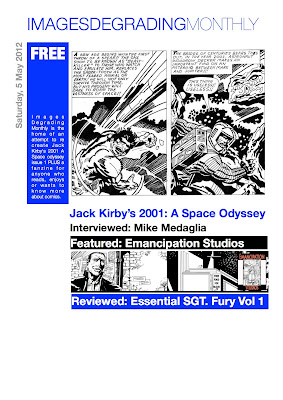 If you would like a digital copy, just drop me a email - if you want to get this in print, just drop down to orbital comics, there will be a few copies on the front counter from Saturday 5th May

The next project?!
Having finally completed my attempt at adapting Jack Kirby's 2001- the question is what is next?

You will note I have not said what I actually intend to do if that is my next project, I am hoping that the images I have drawn may give people a clue…

Since then, I have heard from two more people with two more suggestions

Well what I am going to do as well as ask you all to vote on one of these three is of course to attempt at least one drawing by each - so over the next few weeks voting will be ongoing and next week I will put up something by José Antonio Muñoz and the week after that something by Hugo Pratt I have already attempted a drawing by Sir David Gibbons OBE but here's another one to tide you over... 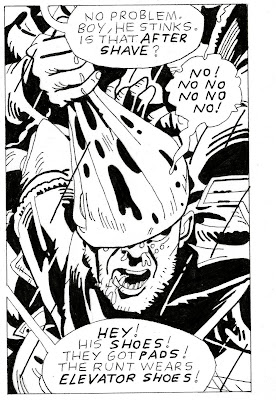 For making the suggestions all three people Mauricio, Ed and Doug can have the original drawing sent to them in the post for free - just send me a email

if there is not enough votes for a majority - I will make a vote myslef!

Anyone who votes I will give a free sketch to as well, some come on already!


Is that it for may?!
As far as i can remember , but then my memory is notoriously unreliable - I have probably forgot something rather important… I don't think I was getting married or anything ?!

Join me for the final page of Milk and Cheese in 2 days time , Thursday 3rd may