You have to be kidding?!

Well the last few days have been a bit of a ego-fest for yours truly…
So I wondered what would be the best thing to put me down to earth again and still retain a bit of cheeky humour?
So I figured why not draw my super-hero namesake?
Just for the record that was the bane of my childhood and I still occasionally get asked where the Batcave is - so I stayed well clear of ever drawing "him" before
But even that possibly is not quite "demeaning" enough - how about if I drew a "kiddified" version of my super-hero namesake?
Aw Yeah!
For those not savvy - (which included myself until very recently) this comes from DCs Tiny Titans - which is kind of like the teen titans but at kindergarten or pre-school or somesuch
And issue 33 - well see for yourself.. 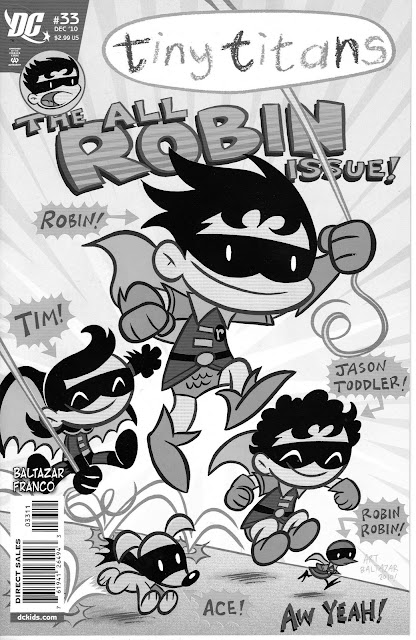 and my version of the same 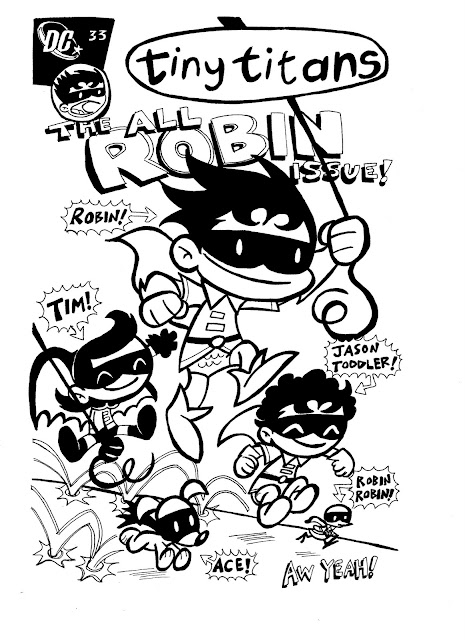 HEY! It's still all about me???!  Holy misappropriation!
But seriously though this was fun to do and fun to read - this would be a good living - ah I should be so lucky..
Posted by Robin at 15:31 No comments:

Well I hope *someone* enjoys the ebook - I know I did making it!

and Yes, there's still more to follow on this on Sunday... you know where to be..?

What do you mean - what ebook... ? Please don't make me quote John Steinbeck!
Posted by Robin at 16:49 No comments:

Okay so just what have I been doing?

Who me? Oh not much… honestly, I mean you must know how shy and retiring I am by now?
Anyways - yes one of the items I was "commissioned" on was to be the concept lead and co-collaborator on a Glamourpuss ebook fanzine
In terms of "Art" I have provided a re-working of "Cameron Diaz" from Dave Sim's version that appeared in Glamourpuss 14, for those not following the path of destruction - Dave Sim chose "Cameron" from one of the many (many) awful originals i sent him…
I have no shame but will freely admit this original is awful (but then i probably spent ten minutes doing it in very crude conditions holding a magazine with a bit of paper on top of it below a light bulb in one hand while drawing using a handwriting pen with the other (i kid not)) so the following has a "advert your eyes" warning - so I have kept it as small as I could

While this re-working (which took at least 2 hours done using a light box on a table on card thickness paper and using proper ink) is possibly just passing muster as the saying goes, hence it's slightly larger 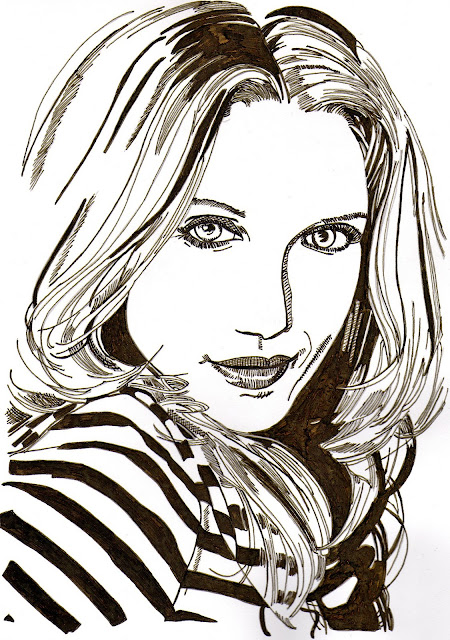 And this drawing makes the cover of the fanzine - 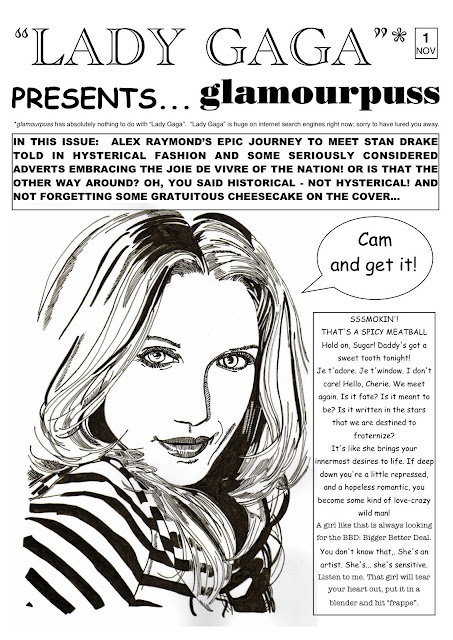 Of course I have provided a ton of text for the inside, but before you loose faith having being bored by my normal long winded commentary on this very blog....
There is a lot, lot better content in this ebook provided by the genius behind Cerebus Readers in Crisis, Jeff Seiler.. who is the the real leading light behind this creation, I just swept the floors (badly I must add)
So why not check it out - its over here
Glamourpuss e-book Fanzine
Yes I do seem to have few connections here and there…!
Speaking of which I do not think this is the only place or the last you ill hear of this little creation, you know what they say about idle hands…
Posted by Robin at 05:31 No comments:

Just a quick update:- I am all ready some 8 pages into my "commission" so looking good, or rather more likely it isn't, but anyway it's still a good few weeks to go before I can hopefully restart Outland!

Thanks for your patience
Posted by Robin at 23:00 No comments:

I thought i would never say these words – but I actually have a commission!
So okay my rates are ludicrously low (and some people may well say they should be) but as the end results may result in some money changing hands I cant put it here as a Work In Progress – It’s not Steranko’s Outland anyway!
So I will be taking a while off from the Outland project as I now have a 32 page project to do – as you see by my progress to date (incidentally I only draw in my free time, such as it is) that may be a while
Once I have finished I will be back to Outland  and sure why not I may even put the details of the other project and how much it is etc up here as well – why not eh?
In the meantime, I hope you will understand and be a bit patient – you know you could always try and draw one of these pages for yourself!
Posted by Robin at 14:33 2 comments:

Running a bit short of time - so (thankfully ?) no commentary - 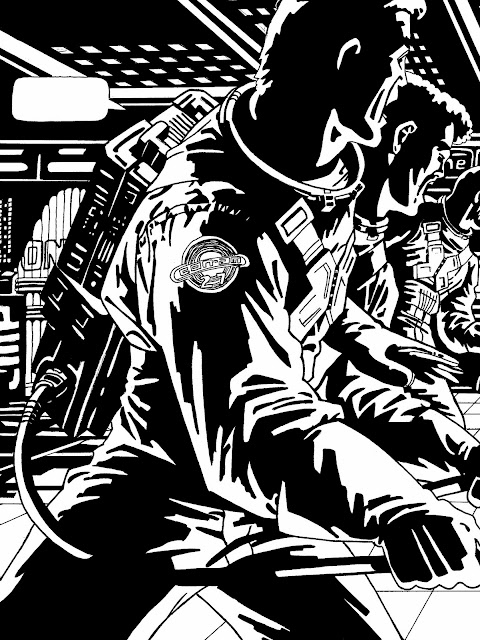 And then there was three...

No, not the first album by Genesis to feature the line up of just Mike Rutherford, Tony Banks and Phil Collins 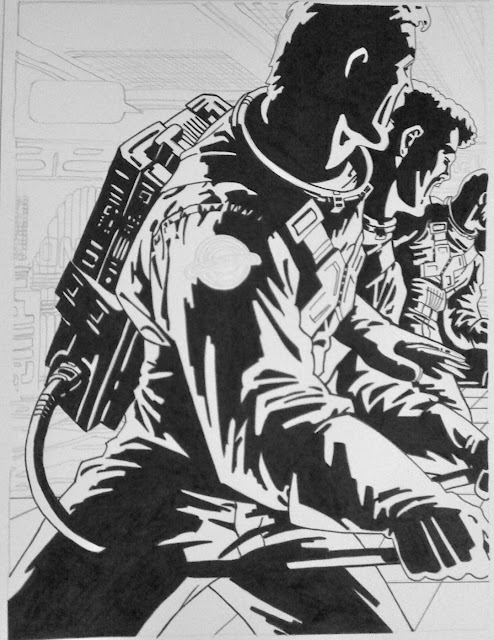 Mind you it does look like they might be signing...  probably "don't step in the lift shaft, darling.."
Posted by Robin at 13:47 No comments:

So here we go - the large anonymous miner is complete:- 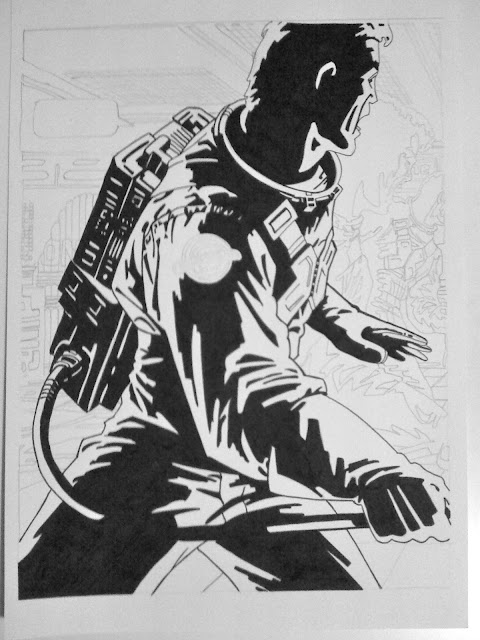 This is actually the largest figure on the whole double spread, so this guy must be important, right?
After all the last double spread had Sean Connery take up nearly a whole page while Peter Boyle and James B. Sikking barley took up a corner of the following page - so previously we was being told the importance of the characters by their size... right?
But here we have a guy - who is exactly that - just a guy - who does not have a name and does not appear anywhere else in the rest of the adaptation (or movie for that matter).... taking up almost a whole page...
This is where I think it's clear to say that my impression is that in movie terms each of these double page spreads is both a big master opening / defining shot providing all the detail of a scene before cutting to a much closer zoom of the characters as well as (in some cases) the closer shots skilfully blended into the same page / single drawing
I have seen it written many a time that Steranko took a good deal of influence from movies and here he is actually adapting one so we have a combination of comic story telling panel progression with movie style approach to the "shots" with the emphasis square on the latter  but elevating beyond both forms into something else
This is another major element that makes this piece of work so interesting to do!
Posted by Robin at 13:48 No comments:

Or is that - oops I did it again - which is to say  I stuck with the big bits all needing black in first... 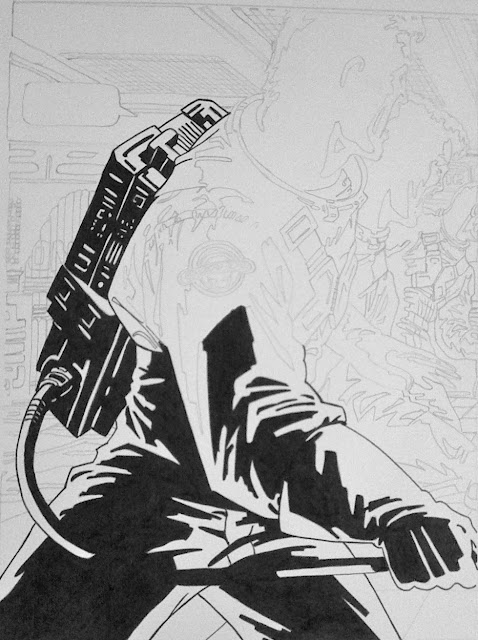 Still it's not looking too bad?
Posted by Robin at 13:50 No comments:

The next double-spread features the rather infamous Air lock Sequence - certainly not one for the squeamish as one of the miners steps into the airlock / lift which depressurises as it goes down without a space suit...

Here in the comic version there is more emphasis on the other miners reacting in shock trying to get to the other guy before the air lock door closes:- 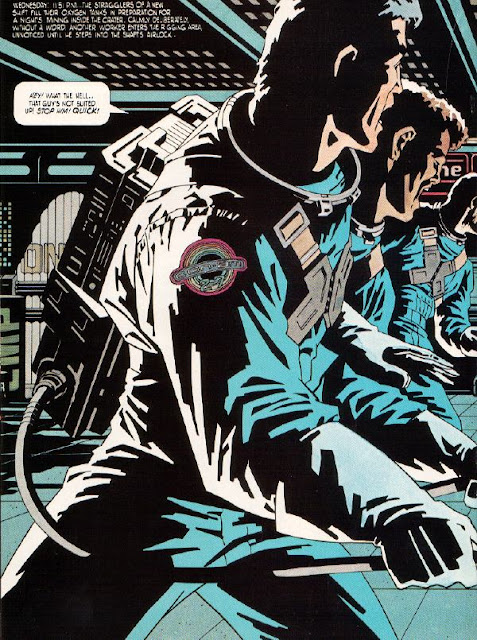 I wonder if the movie was a pre cursor of some of those splatter exploitation movies, like videodrome?

One thing is for sure Total Recall took its inspiration from this sequence and It certainly went a lot further... and not just in splatter but also in the liberal bending of the laws of physics...

Anyways here is my pencils of the above... 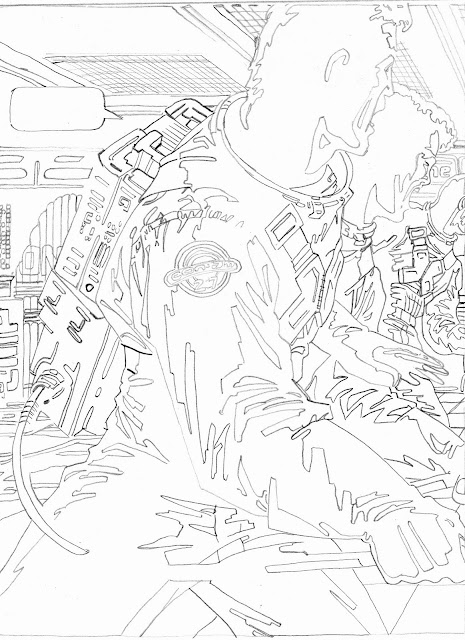 The splat itself occurs on the next page! You have been duly warned - But the only splatter on this page will be of lots of ink....
Posted by Robin at 11:02 No comments:

After a few days elsewhere …
I have finished page 5!:- 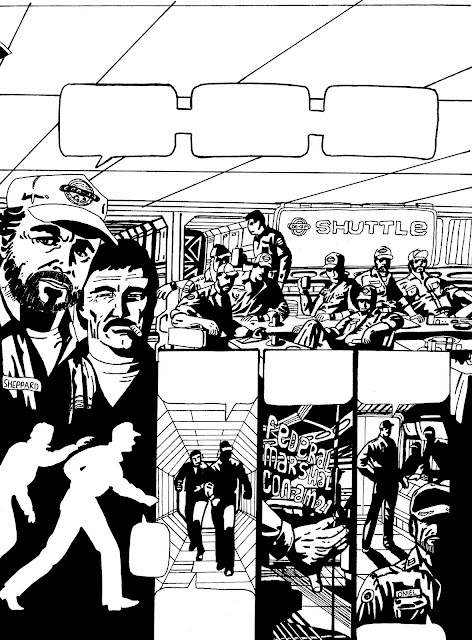 And as before here is a picture of pages 4 and 5 together as Stearanko intended:- 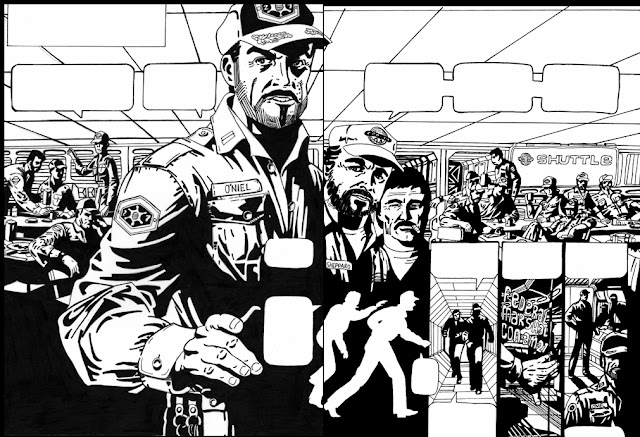