March (whats left of it!) is Doubt land issue 2 Month

These are two questions which are asked about "The New Seed" in the final page of Issue 1 of Jack Kirby's 2001:- 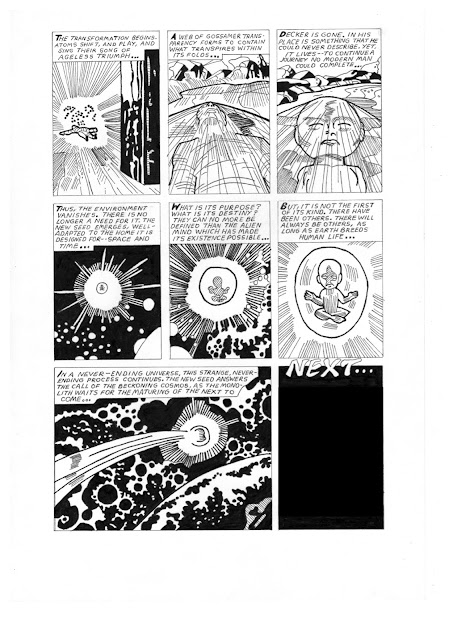 Which could possibly suggest a link to the movie or at least more properly the kirby comic adaptation of the movie by clearly stating that the visually familiar "baby in space" is not the first of its kind ...

and thus the newly born "new seed" goes off into a very kirby krackled cosmic universe...

This is where things become rather unglued…. and the whole premise of the comic effectively centres on just one caption on this very page

Taken on its own you think, sure thats exactly what the movie was trying to say by deliberately not defining almost anything

But herein lies the rub

This is the complete opposite of what the comic does

"He who hunts alone" and Decker are only linked by dint of a caption saying so, there is no other link in their behaviour or even their development - and the things that happen to them don't make any real sense in the context of where the story is going - which is a evolutionary thrust

So we are clear what i am saying here is its fine to feel the need to explain and clarify but to try and do that in the frame work of a abstract,  illogical and ambiguous plot does not work that well

How much of this was a editorial or marvel decision is unknown, but it seems unlikely this is exactly what Jack Kirby himself actually intended

All this aside the overall conclusion is simple 2001 as a comic was way ahead of its time. If Kirby did this 10 years later and self published - how much different would the end result have been?

Next Week - Its the epilogue to this project - "The Lost Worlds of 2001" sharing for the first time what actually happened when i tried to do the movie adaptation and why this got abandoned - yes a few pages do indeed exist!
Posted by Robin at 11:29 No comments:

To infinity and beyond 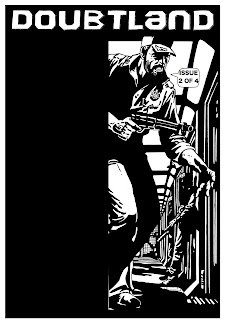 To infinity and beyond

Is where Woodrow Decker finally manages to go in this weeks next completed page of 2001:- 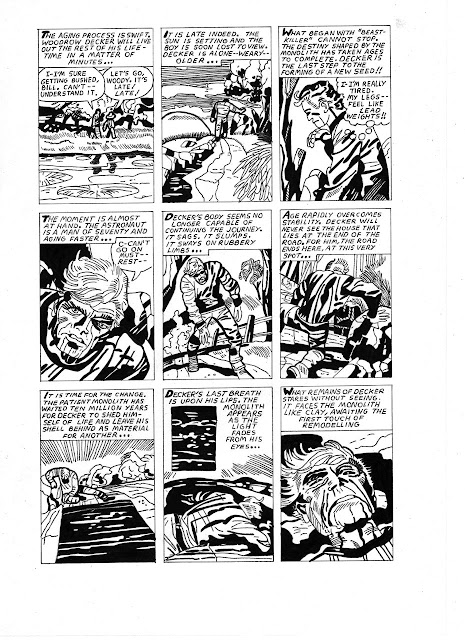 As with the previous page, it is important to note that the entire experience is a artificial reality created precisely to foster Decker's evolution to the next stage of this process and that in the comic, this is something much more recognizably human or a human experience unlike the 2001 movie which could arguably be said to be cold and distant at best

We never get to see what would be at the end of the road that Decker was traveling down, so the message is clear its not about the designation but the journey taken to get there

The journey in question is the story contained within this issue, which now has only one more page in which to unfold and complete

What will the conclusion be?

If you have been reading regularly there are quite a number of threads I have left hanging the central one being:-

What was the point of the first half of the story - featuring "he who hunts alone" in  relation to the second half featuring Decker here, what is message about evolution

What is the message about mankind his ancestry and his future

In short what was this issue all about

Perhaps by now you will have formed your own opinions

I certainly hope so, One thing I am have definitely been hopeful about is to try to get you all to think a lot more about comics, rather than say just reading n issue in 5 - 10 minutes and then mostly dismissing it (something I have been known to do myself)

Of course this weeks blog title is a quote from Toy Story - which was irresistible to use given that Decker is referred to as Woody on the page reproduced!
Posted by Robin at 11:16 No comments:

Home on the range with some southern comfort

Home on the range with some southern comfort 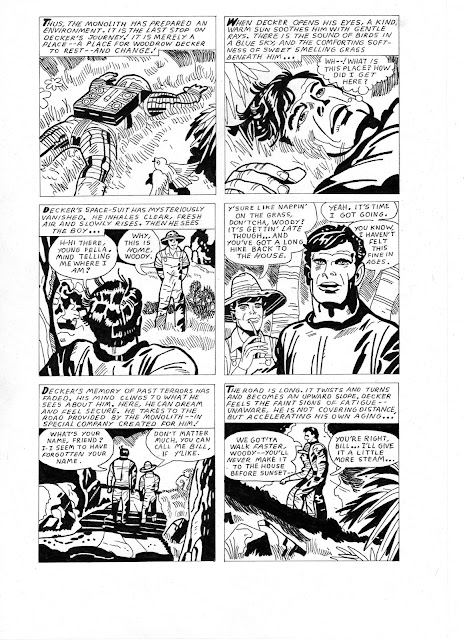 The message being reasonably clear - this is not real

The movie one could argue could be said to be rather cold in this aspect, Bowman is left on his own to age rapidly only meeting him self across generations of each age range in transition

Whereas the comic features a true southern character (who reminds me of "Reb" Ralston from Sgt. Fury and his howling commandos) who is warm, welcoming and provides both a focus and a sense of direction for Decker

It is interesting to note - that at least in my eyes this is the first real scene that really gives any deeper definition to Decker himself, circumstances before this point did not allow that space which is a bit of a shame as it would be an interesting character stay to know the character more full both pre and post monolith

or is decker being lead up the garden path

Lets find out - Next week

http://comixstripped.blogspot.com/2012/03/images-degrading-forever.html
Posted by Robin at 14:09 No comments:

Sights that stagger the mind and assault the senses! 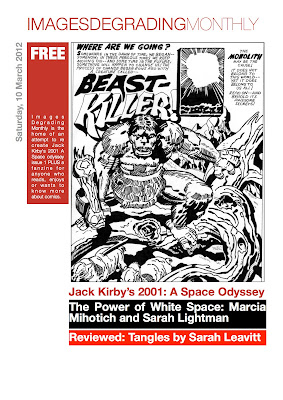 Everyone can have a FREE copy – Images Degrading Monthly Digital Subscriptions are open now, just send me a email to robin.barnard@ymail.com and I will email you back your free copy

Sights that stagger the mind and assault the senses!

Is what both we and Decker to get to see on this next completed page of Jack Kirby’s 2001:- 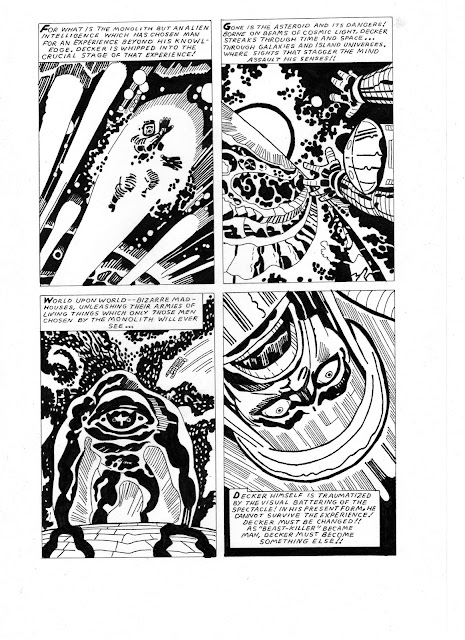 In the second ground breaking 4 panel spread in this issue alone, the scope and breadth of storytelling used in these 4 panels itself is staggering and all contain a real sense of artistic beauty

Firstly Decker becomes like a comet, blazing its trail towards us in a race with other comets all heading in one direction at a speed that only one can guess

Next we are behind Decker who could be in free-fall above an utterly alien and ravaged landscape as the sun of an unknown planetary system crosses the horizon, Decker heading towards the surface

These panels can actually be looked at in almost any order they could even be a different point of view of the same scene, this is clearly not reality after all

It is here where at least I can finally see or understand what was motivating Kirby to work on 2001 in the first place, the question of is there something more than just man, and if so what is the next level

Is it gods like in the fourth world saga?

Or something else completely

And if so how does man get to that stage?

There are two infinitely better considerations of this page at the Kirby museum web site – enjoy!

The ego has landed
Apparently I might just feature on a podcast  or even in a exhibition  - Though you need sharp eyes and open ears (or is that the other way around) to notice either, hey thats why i am telling you about them!

Honestly thanks to all involved, its certainly more than I deserve!
Posted by Robin at 13:55 No comments:

March Madness/Between a rock and yet more rock

Ah, March – Month of the mad March Hare, and of course I am suitably mad myself (but I don’t have a hat, fortunately)

March is Doubt land issue 2 Month
After a very successful debut at the London Super Comic Con where copies sold like hotcakes, I am pleased to offer issue 2 of “Doubt land” for just £1 a copy via eBay to anyone in the world for the rest of March

Well it is FREE, after all – and everyone can have a FREE copy – Digital Subscriptions are open now, just send me a email to robin.barnard@ymail.com and I will email you back your free copy

The first issue of Images Degrading Monthly will be released in 7 days’ time on the 8th March, so get your email sent between now and then to get your copy

Images Degrading Monthly is 16 pages, of which nearly 50% is all brand new and never before seen content, all about comics, art and creativity so get your copy now!

Between a rock and yet more rock
Is exactly where Decker is stuck in this week’s next completed page of 2001:- 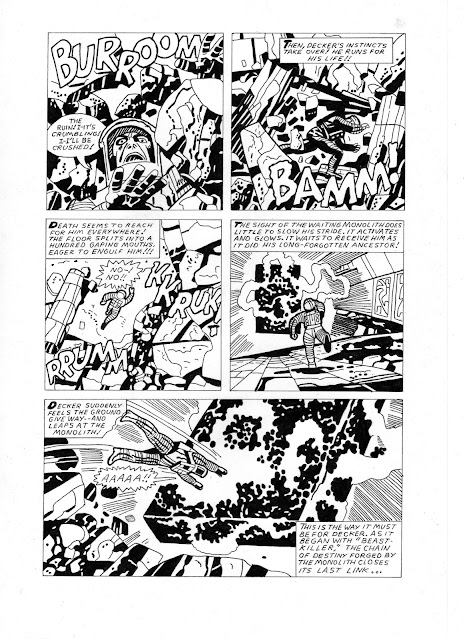 Firstly Decker and Mason decided to carry on despite their Space ship burning into flames, next Decker attacked the “Life on Mars” with a  rock a totally pointless gesture born out of shock and frustration, now Decker is totally blindly running for his life away from a rock slide, with no time to even think about where he is going

And lo, in front of Decker just so happens to be a rather conveniently placed (and active) monolith

But that just does not make sense.  It would be acceptable if the Monolith has just been black and therefore not that visible or just not seen by Decker at all, but even in a blind panic and possibly even more so anyone would change direction from anything that would be in the way of the path of flight.  It is in fact that exact instinct which allows Decker to survive the rock slide which compounds this

If Decker had run the other way there would have been no monolith in that direction, If Decker had been in front of Mason he would not even be alive right now

It’s not just this but also I am struggling to see what in Decker’s personality is worth transcending as was David Bowman’s, Bowman as pointed out last week reawakened his long forgotten survival instinct in a survival of the fitted against machine based artificial intelligence in the form of HAL, whereas there has been no such transformation for Decker, if anything almost the opposite

The credulity is stretched further by seeking a connection, any connection between this part of the story and the first part with Decker being an ancestor of “he who hunts alone” a fact that is reinforced in the last dialogue box

Still we have a few more pages to go maybe we will find out some more answers in those?  One can only hope
Posted by Robin at 12:07 No comments: