If you remember not that long ago, I told you all about my first American comic book purchase

Well the first comic I ever convinced my parents to get for me was not either The Beano or The Dandy (as yes, I am British).... it was... 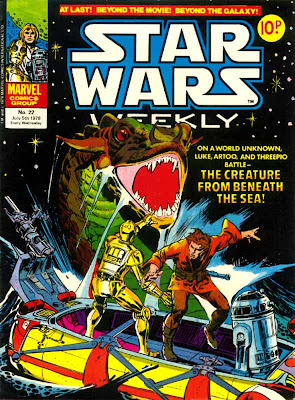 As for why I chose that comic , even at that young age - the answer was not as straightforward as you imagine, I did even even see (as it eventually became to be known) the 4th Star Wars Movie, "A new hope" until it was finally shown on TV quite some years later
No what it was is I had seen the comic before at a friends and I wanted to read it for myself.. I particularly remembered the cover to issue 13 with its exciting cover copy "Beyond the Movie Beyond the Galaxy" 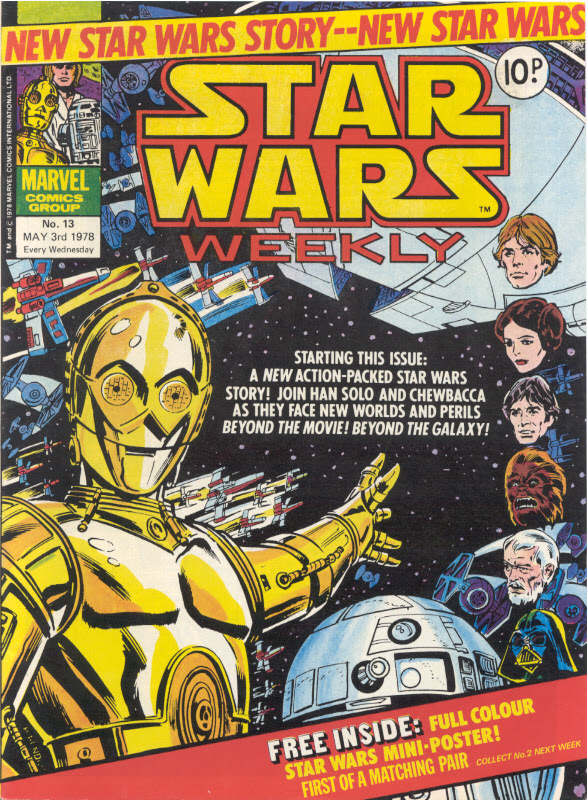 So after some persistence I got my 8 year old hand on issue 22 inside of which was:-
"Whatever Happened to Luke Skywalker?" by Archie Goodwin, Carmine Infantino and Terry Austin
"To Save The Empire" (part of a "Starlord" story) by Chris Claremont, John Byrne and Terry Austin
"Sinister Secret" (a "Tales of the Watcher) by Stan Lee, Gene Colan and Paul Reinman
and I was lucky enough to get a run of some 10 or so issues
To my 8 year old mind these comics where exciting vibrant and action packed and I must have read them quite a lot
As soon as I was able to purchase my own comics I set about getting these back (as they had long gone by the time I was earning my own money)
Looking at the issue now the amount of sophistication in these stories as well as the quality of the art are something pretty special, they set the bar pretty high for me in terms of what a good comic should be in both areas, but I have never lost sight of seeing comics as being entertaining first and foremost
Every comics book fan probably has a different comic, but a similar story - like a first love - you never forget your first comic
Posted by Robin at 13:39