We have a brand new suggestion in - this time from Matthew J. Brady who says:-

For the next thing, how about some Frank Miller? I think it would be interesting to see his earlier, Daredevil-era stuff in your sharp, high-contrast black and white. Not necessarily a whole issue's worth, but a cover or interior page or two would be cool.


That's a good suggestion as it would allow me to cover Frank's Career as well as discussing the difference between a penciling and doing breakdowns as well as a inker and doing finishes - as Klaus Janson and Frank shifted positions as the Daredevil run continued with the last few issues being more Klaus than Frank..


Sorry I am a bit short of time so I have not been able to do a drawing (but i do normally allow myself a week per page!) 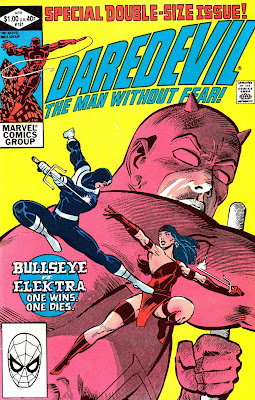 
Anyone can vote, just post a comment on my blog telling me which of these you would prefer to see and whichever thing gets the most votes is the thing I will do first - voting will close Friday 10th June 2011
Posted by Robin at 12:53