The time for making any more suggestions as to what I should draw next has now closed, thanks to everyone we have three suggestions on offer:-

Voting for one of these choices, however is very much open - until the end of this week

Now I am willing to go for whichever one of the above gets the most votes, but as there hasn't been many votes as of yet I may just chose which one I prefer - so get voting please

I want this blog to be appealing to at least a few people!

Now I can understand why someone might think I am just "swiping" art when I redo an original drawing - well that's not quite right as I represent the work as close to the original as I can manage and I always clearly state where it came from, I never pretend its mine or change the faces or something similar

But this and of course this blog entire kind of brings into focus the question of where does art begin and tracing / copying end?

But is that art? Well i personally wouldn't necessarily make that claim - but maybe it could be seen as something along the lines as an engraver for a metal plate printed book illustration - the engraver didn't create nor draw the original drawing - yet they have to painstakingly recreate it as accurately as possible onto metal so it can be printed accurately many times - I would say having that kind of skill is an art of itself

To clarify:-  No I don't think I have anywhere near that level of skill

But what does any of this have to do with Ape slayer?

Ape slayer for those who did not know made his (rather unwelcome) appearance in the Marvel UK Planet of the Apes comic issues 25 -30, and never in any US comic

The reason for this was quite simple - the Ape Slayer stories was actually a few "Killraven" stories, with all of the protagonists replaced by redrawn ape heads (and bodies) and a light editing of some of the dialog to match

Think I am kidding? - here is the 3rd page of issue 25 - where someone clearly forgot to white out Killraven and replace it with Ape Slayer in a dialogue box even though the rest of the page has been substantially altered 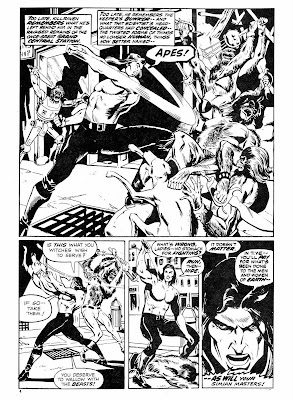 Well you can probably guess how well this idea went down with the readers of the comic, needless to say this was never repeated again and that was before the original Killraven strips where actually published in the UK to make the situation rather more obvious

As to why this happened, simply enough the UK comic was actually in front of the US one (and in a lot of cases the USA was actually reprinting what had first appeared in the UK) so much so that there was no strip for next week - ape slayer was the solution to this problem, albeit a far from elegant or fan pleasing one

A solution to this day which remains unknown as to whom chose it, who did the drawings and who re wrote the script

But is that being far too harsh?

Is this a far more obvious example of swiping in its negative sense or do the people who tried their best under ridiculously limiting situations to make something (lemons out of lemonade as it where) deserve some attention for their efforts?

Its not as cut and dried as you might think - in reality what you want to do is always limited by physical limitations, the skill of the artists, the amount of time they have to do it in and so on and at Marvel in those days you did the best you could in the circumstances 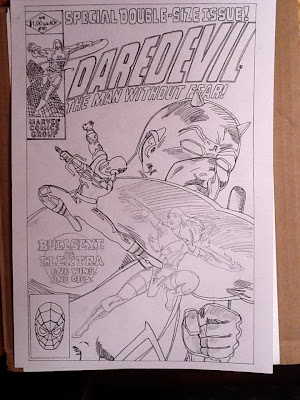