Is this Dennis Franz on the next completed page of Daredevil? 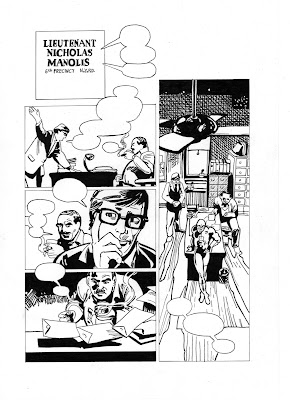 They do look similar
And the NYPD officer in this issue, Lieutenant Nicholas Manolis even spouts similar dialogue while simultaneously having a Cuban type cigar and a cup of coffee in one hand.
But this being only a semi-serious issue the fun starts straight away, with Wilbur Day (stilt man’s alter ego) going to the NYPD to report the robbery of his suit “declaring he wasn’t intending to use it for criminal purposes or anything like that” and asking to contact Daredevil
In response to being told the NYPD don’t know how to do this, Wilbur says "thought you'd have a hot line…or beacon…or something…" says Wilbur – another loaded statement of Frank Millers
This time Frank is clearly tipping his hat in the direction of the rather infamous Batman Tv show, alluding to Commissioner Gordon and Chief O’ Hara

And Frank is again using this to point out there’s nothing like The Batman Tv Show in this issue and no room for similar, even though it is clearly a bit of a tongue in cheek story – Frank is defining the line between retaining the form of daredevil he has established and an outright parody.
"all you super types gimme a pain" replies the NYPD officer
At which point Daredevil arrives in the office drops down a pile of those copies of copies and is "all ears" for Wilbur’s story
It’s interesting to ask how much is said by just having Daredevil drop in when he does as he effectively blows his and the NYPD's cover for doing so, its liked dropping in those copies of copies was more important.
And it would not have been a case of Daredevil not knowing what was going on in the office as by definition he is all ears and has hyper sensitive hearing.
So he didn’t care basically? Yes though subtle this is a link back to the on-going degradation of Daredevil / Matt Murdock, but when does the cover lead “fall” come into place
We will see as the story progresses – next week…
---
Sound The Strumpets
Being someone who appreciates the effort it can take to make a even half decent comic, I always find it very interesting and inspirational to meet up with anyone who has not only made their own fully defined works of art, but has done so in a way that is clearly their own and has rightly captured the imaginations and attention of a number of people.
Such a person is the incredible Ellen Lindner, who is probably best known for her graphic novel Undertow and to my eye has a very european feel to her line work combined with a 60s america look (mostly on her self caricatures).
If this was not inspiring enough - then the fact that Ellen herself is part of what could be seen as a whole movement to make the kind of self published material that the Guardian Newspaper should give their eye teeth to get reprint rights for, while working co-operatively and collaboratively with a whole bunch of equally inspiring artists, fostering talents and always having the door and the eye open for more collaboration should be even more impressive.
The newest result of this frisson is a brand new magazine called The Strumpet (cover art by Ellen herself)

You can check out more about this great publication, watch a cool video and even say Hi to Ellen - all at this link:- The Strumpet
Its only $2 for a PDF of the issue which will be packed with quality material and well worth a read!
IDFW3
Speaking of inspiration, I have been fortunate enough to get some feedback as a result of my small print run of IDFW - only 2 weeks (and issues) in!
Which to my mind more than justifies that going to print was worth doing, this and the small fact that all the copies of issue 1 went in a week!
So (at least at the moment) a Hello and a Thank you to Alexander Hunt, who hopefully we will be hearing some more from in the not too distant future
Which is a good a place as any to remind you all, that the door is open for feedback contributions etc, just get in touch - there is quite a few ways to do that these days!
Here is IDFW3 again a few days ahead of its print run this Saturday, enjoy 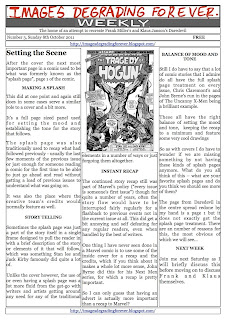 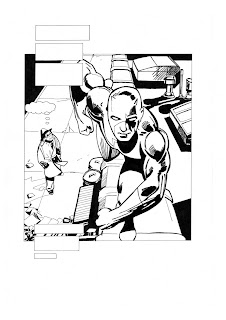